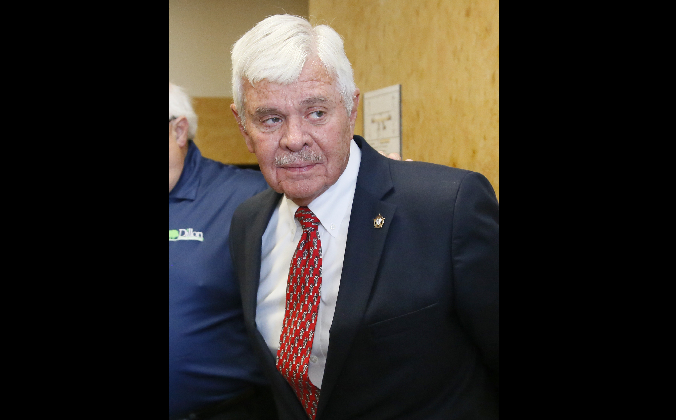 Former Tulsa County Sheriff Stanley Glanz already had been sentenced in July to a one-year suspended term on misdemeanor charges stemming from a separate grand jury investigation. Robert Bates, the former volunteer deputy who shot Eric Harris, has been sentenced to four years in prison for second-degree manslaughter.

Special prosecutor Rob Barris’ announcement that Glanz will face no further charges stems from an Oklahoma State Bureau of Investigation probe into misconduct allegations that began after the April 2015 fatal shooting of Eric Harris.

After the shooting, questions arose about the county’s reserve deputy program and about Bates’ training and whether he received special treatment from Glanz, who was a longtime friend. Bates said he mistook his handgun for a stun gun when he shot a restrained Harris during an illegal gun sales sting. The reserve deputy program was shuttered and partially revived earlier this year.

The prosecutor said in a statement: “Based upon the (state bureau of investigation) report and the previous actions taken by the grand jury in 2015, no further action is required and this office determines this matter to be closed.”

Dan Smolen, an attorney for the Harris family, said Barris’ decision not to levy charges against Glanz means that “justice did not prevail.”

“The fact of the matter is Eric Harris was shot and killed by Glanz’s former fishing buddy, who was allowed to be there because of corruption,” Smolen said Friday.

Scott Wood, an attorney for Glanz, said he was “relieved” the probe was over.

“You never know who they might have talked to who didn’t get called before the grand jury,” Wood said

Consultants hired by the county issued a scathing, 238-page report in February that found that the sheriff’s department suffered from a “system-wide failure of leadership and supervision” and said the agency had been in a “perceptible decline” for more than a decade. Shortcomings in its reserve deputy program were just the most-visible signs of trouble within the agency, it said.

That report followed Glanz’s indictment in September 2015 in which a grand jury accused him of failing to release a 2009 internal report that raised serious concerns about Bates’ ability to do its job. The memo alleged that superiors knew Bates didn’t have enough training but pressured others to look the other way because of the wealthy insurance executive’s relationship with the sheriff and close ties to the agency, which included donating thousands of dollars in cash, vehicles and equipment to the department.

Glanz pleaded no contest in July to failing to release that report. At the same hearing, he pleaded guilty to willful violation of the law for an unrelated incident in which he received a monthly vehicle stipend while having access to county-owned vehicles.

The Oklahoma State Bureau of Investigation completed its inquiry in October and submitted its 929-page report to Barris, the special prosecutor.

“Now that this investigation is over, the Tulsa County Sheriff’s Office can close this difficult chapter in our department’s history and continue to move forward with positive change,” new Sheriff Vic Regalado said in a statement Friday.

Officer Betty Jo Shelby was charged with first-degree manslaughter in the fatal shooting of 40-year-old Terence Crutcher. Shelby has pleaded not guilty.