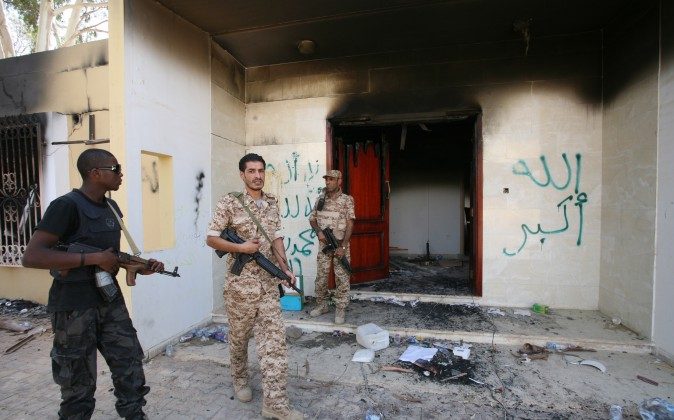 In this Sept. 14, 2012, photo Libyan military guards check one of the US consulate's burned buildings in Benghazi, after a deadly attack on Sept. 11, 2012, that killed four Americans. (AP Photo/Mohammad Hannon)
US

A former State Department official has accused the agency of destroying documents about the Sept. 11, 2012 attack on the American Embassy in Benghazi. Former Deputy Assistant Secretary Raymond Maxwell, now retired, said he learned that a staff member was pulling files that contained embarrassing information about security lapses related to the attack, he told The Daily Signal, news arm of the conservative Heritage Foundation.

Ambassador to Libya Christopher Stevens and three other Americans were killed in the attack.

The purpose of taking the material was to keep a review board investigating the Benghazi attacks from learning about the worst security problems, according to Maxwell.

Maxwell did not name the staff member. The document withdrawals happened at the State Department about a month after the attack, the Signal reported.

Rep. Jason Chaffetz, (R-Utah), said in a Monday interview on Fox News that Cheryl Mills, Clinton’s chief of staff was in the room when the documents were being pulled. Deputy Chief of Staff Jake Sullivan was also there, according to Chaffetz.

The administration has denied that the incident happened, according to the New York Post. “Any accounts to the contrary … are completely without merit, completely ill-informed,” said State Department spokeswoman Marie Harf, the Post reported.

The Associated Press and most newspapers and television stations did not report Maxwell’s allegations.

The House Select Committee on Benghazi will hold a public hearing on the attacks Wednesday.