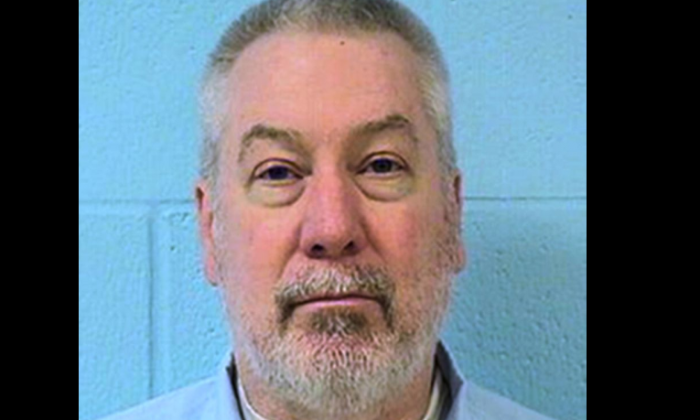 This undated file photo provided by the Illinois Department of Corrections shows former Bolingbrook, Ill., police officer Drew Peterson. Peterson is set to appear in a southwestern Illinois courtroom Friday, July 29, 2016 for sentencing, after he was convicted in a May murder-for-hire trial. Jurors agreed that Peterson attempted to hire an inmate's uncle to kill Will County State's Attorney James Glasgow. (Illinois Department of Corrections via AP, File)
Crime and Incidents

CHESTER, Ill.  — Former suburban Chicago police officer Drew Peterson was given an additional 40 years in prison Friday for trying to hire someone to kill the prosecutor who put him behind bars for killing his third wife.

During his sentencing hearing in Randolph County Circuit Court, Peterson told Judge Richard Brown he never wanted Will County State’s Attorney James Glasgow killed and claimed to know all along a fellow inmate was recording their conversations. He added that at the time of the recordings, in November 2014, he was suicidal and didn’t believe he would live to see the scam come to fruition.

“I never did try to have you killed,” Peterson said toward Glasgow. “You can think what you want.”

After the hearing, Glasgow expressed skepticism about Peterson’s statement, calling him “deluded.”

Peterson was convicted in the case in late May.

Glasgow said in court Friday that a lengthy sentence was necessary as a deterrent, otherwise convicts will believe they can kill a prosecutor and get the minimum sentence.

“It’s critical that a message be sent that this will never be (allowed) in Illinois,” he said.

The 62-year-old Peterson is serving a 38-year sentence for the murder of his third wife, Kathleen Savio. He is scheduled for parole in 2047, but Friday’s sentence must be served consecutively, making it likely Petersonwill die in prison.

Savio’s death was initially deemed accidental. Glasgow reopened the case after the 2007 disappearance of Stacy Peterson, his 23-year-old fourth wife. Drew Peterson was never charged in her disappearance but told the informant he worried that Glasgow would eventually do so.