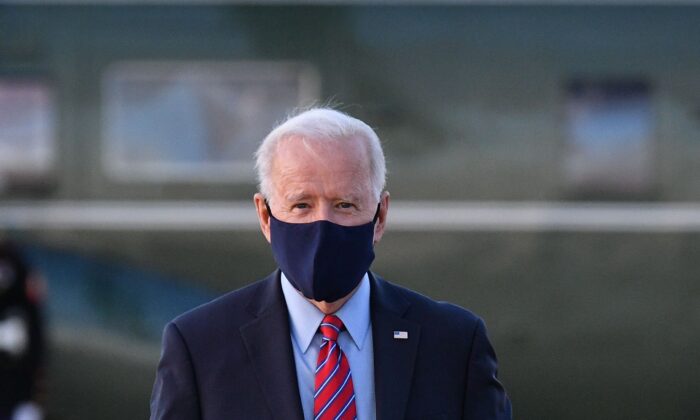 President Joe Biden makes his way to board Air Force One before departing from Andrews Air Force Base in Maryland on Feb. 5, 2021. (Mandel Ngan/AFP via Getty Images)
Executive Branch

A top ethics lawyer during the Obama administration said this week that President Joe Biden’s administration should clarify ethics rules after it was revealed his brother’s law firm was using the sibling relationship in promotional material.

Frank Biden was hired by Berman Law Group as a senior adviser in 2018. Since then, the Florida-based company has touted his ties to Joe Biden. In one post in 2018, the firm wrote that “Joe Biden’s brother joins The Berman Law Group.” In an advertisement that ran on the day Joe Biden was inaugurated, the firm said Frank Biden shared his brother’s “commitment to environmental and social justice.”

“I think there is a problem here, and it’s an appearance problem, admittedly, but appearance matters in a period when we’re trying to rebuild after what was inarguably the most unethical presidency in our history,” Walter Shaub, former director of the U.S. Office of Government Ethics, said during an appearance on CNN.

While Biden pledged to keep distance between his family and the White House during the presidential race, his brother’s law firm has undercut that.

“I think it’s not enough for the White House to tell us they have a mysterious process of some sort. I’d like them to tell us what that process is. And although it’s not required by the rules, we’re in a period when we’re rebuilding from ethical failures, so I’d like to hear the President say that he has asked his brother to stop touting the connection to the White House,” Shaub said.

“Now, he can’t control his brother, but he certainly can reassure us that he has asked him. He can share what the process they put in place is, and he can also ask that all of his political appointees will refrain from dealings with the law firm and defer to career government officials to handle any matters that arise. I think that would go a long way to resolving the appearance concern, and I hope they’ll do that, because they haven’t done it yet.”

The White House didn’t respond to a request for comment on Shaub’s remarks.

White House press secretary Jen Psaki told reporters last month that “the president is committed to ensuring we have the most ethically vigorous administration in history, and that includes restrictions on what—how his image can be used, and that is something that he’s conveyed publicly and privately as well.”

“It’s the White House’s policy that the President’s name should not be used in connection with any commercial activities to suggest or in any way they could reasonably be understood to imply his endorsement or support,” she added.

The Berman Law Group didn’t turn a phone call. Frank Biden told CNBC via email that he “never used my brother to obtain clients for my firm.”

“Our firm has long been involved [with] this lawsuit. Social justice is something I have been involved in for years. I will never be employed by any lobbyist or lobbying firm,” he added.

In the Jan. 20 ad, Frank Biden was quoted as saying: “My brother is a model for how to go about doing this work. One of his central tenets is that one should never question another man’s or woman’s motives or assign blame to them. That way, you avoid creating a disparity that prevents any kind of coming together. You can of course question someone’s judgement, and that’s what we’re doing by bringing this to court.”

The firm’s biography page for Frank Biden says he was involved in his brother’s election campaigns as an advisor and unpaid campaign coordinator. He also served in the Clinton administration.

Joe Biden has faced scrutiny over family members. His son Hunter Biden was involved in business in both Ukraine and China while his father was vice president and still holds a stake in a Chinese firm. During the same time period, Frank Biden was utilizing his last name to push a charter school through. More recently, Biden’s son-in-law Howard Krein has been closely involved with the COVID-19 response, stoking concerns.

Joe Biden has promised to keep family away from government.

“We’re going to run this like the Obama-Biden administration,” he told People magazine in a recent interview. “No one in our family and extended family is going to be involved in any government undertaking or foreign policy. And nobody has an office in this place.”