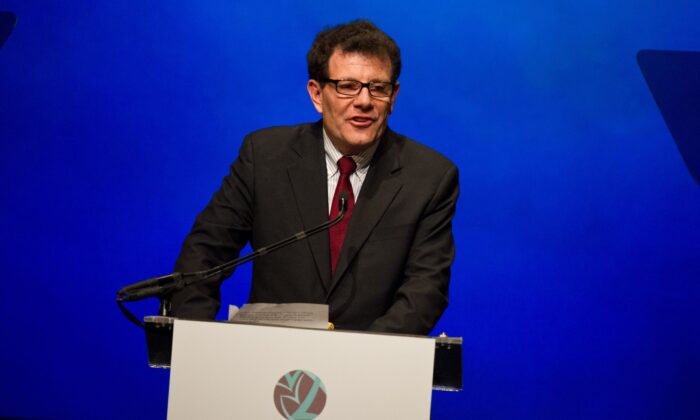 Nicholas Kristof of the film 'Reporter' poses for a portrait at the Film Lounge Media Center during the 2009 Sundance Film Festival on Jan 17, 2009 in Park City, Utah. (Matt Carr/Getty Images)
Regional News

“I’ve never run for political office in my life,” Kristof, who is running as a Democrat, said in a campaign video posted on social media, expressing it as an asset. He said he felt compelled to run for governor because, after covering crises around the world, he was heartbroken to see ones afflicting his home state.

“I have spent a lifetime shining a light in the darkest corners of the globe, and it broke my heart when I returned from crises abroad only to find crises here at home, and that’s why I’m running for governor,” he said.

“It’s hard to watch your home state struggle when you can make a difference on homelessness, education, jobs,” he wrote on Twitter in announcing his run for governor of Oregon.

With a career spanning nearly four decades at The New York Times, Kristof, 62, who grew up outside Yamhill, Oregon, won a Pulitzer in 1990 with his wife and colleagues for work on the pro-democracy movement in China and at Tiananmen Square. He has also been a Pulitzer finalist a further seven times.

Kristof had been on leave from The New York Times since June as he explored a run for Oregon governor, and announced his resignation from the news outlet earlier this month.

He joins a crowded field of Democrats seeking their party’s nomination to be the candidate in the 2022 election to succeed current Democratic Gov. Kate Brown, who is term-limited and unable to run for office again. Candidates include Oregon House Speaker Tina Kotek and state Treasurer Tobias Read. Democrats have held the governor’s office since 1987.

In his campaign video, Kristof said political leaders have been unable to resolve issues such as drug addiction, homelessness, unaffordable housing, a spiraling homicide rate in Portland, and weak mental health support.

“Nothing will change until we stop moving politicians up the career ladder year after year, even though they refuse to step up to the problems Oregon faces,” said the former journalist.

“It’s time to do something about a system that’s rigged against so many ordinary Oregonians. But nothing will change until we stop moving politicians up the career ladder year after year even though they refuse to step up to the problems Oregon faces,” Kristof said.

Kristof has faced questions of whether he’s even eligible to run for governor. According to the law, a candidate must have been a resident of the state for at least three years before an election. Kristof voted in New York state in November 2020.

Kristof and his wife, Sheryl WuDunn—who also was a New York Times reporter—bought a 150-acre property in Yamhill in 1993 and have worked the land and paid Oregon property taxes on it.

“When Abe Rosenthal hired me in 1984 to cover international economics for The [New York] Times, I figured I would leave only by retirement,” Kristof said in announcing his resignation this month. “This has been my dream job, even with malaria, a plane crash in Congo and periodic arrests abroad for committing journalism. Yet here I am, resigning — very reluctantly.”

“I’ve been on the ride of a lifetime with The [New York] Times. I’ve gotten to know presidents and tyrants, Nobel laureates and warlords, while visiting 160 countries. And precisely because I have a great job, outstanding editors and the best readers, I may be an idiot to leave,” he continued.

“But you all know how much I love Oregon, and how much I’ve been seared by the suffering of old friends there. So I’ve reluctantly concluded that I should try not only to expose problems but also see if I can fix them directly.”