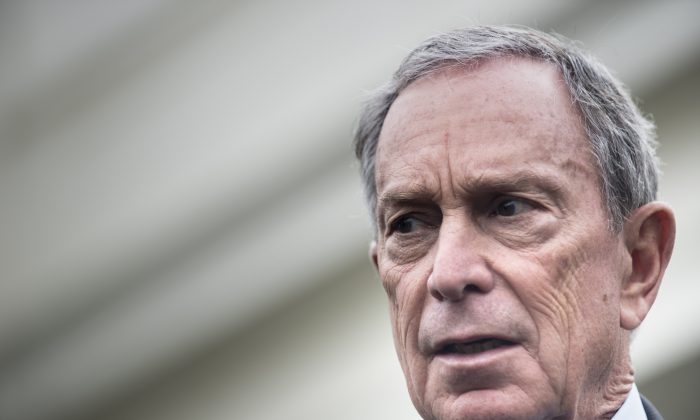 Michael Bloomberg speaks to reporters outside the West Wing of the White House after a meeting in Washington, DC., on Feb. 27, 2013. (Brendan SmialowskiAFP/Getty Images)
Politics

Bloomberg “was intrigued enough by the prospect of Donald Trump’s becoming the Republican standard-bearer that he commissioned a poll last month testing how he would fare against Donald Trump and Hillary Clinton, according to two sources close to Bloomberg,” reported the New York Times.

“But he has often very publicly flirted with a run, savored the attention, then announced that he would not pursue the candidacy.”

A source close to the former mayor confirmed the report with CNN, although none of the sources would discuss the poll’s findings.

There’s been lots of talk over the past year or so that Bloomberg could run.

“He led the largest city in the country as it prospered for a dozen years, and to see this guy who is all talk seize control of the apple cart is galling to him,” a friend told the National Review last fall.

That came after Ian Bremmer, a Time magazine columnist and president of the consulting firm Eurasia Group, said via Twitter: “Word from those that know: Mike Bloomberg now seriously considering independent run.”

And New York Post columnist Michael Goodwin claimed in June 2015 that Democrats who were disgruntled with Clinton were urging Bloomberg to run.

At the peak of the speculation and reports, Bloomberg aide Kevin Sheekey told Newsweek that if Bloomberg–who is worth an estimated $36 billion–ran, he would have a $1 billion campaign.

Bloomberg himself told New York Magazine, though, that he enjoys his job as president of Bloomberg.

Answering a question about if he can rule out running for president in 2016, he added: “Yes. It’s just impossible. I am 100 percent convinced that you cannot in this country win an election unless you are the nominee of one of the two major parties. The second thing I am convinced of is that I could not get through the primary process with either party.”

State deadlines give candidates until about March to launch independent or third-party campaigns, experts told the Associated Press.