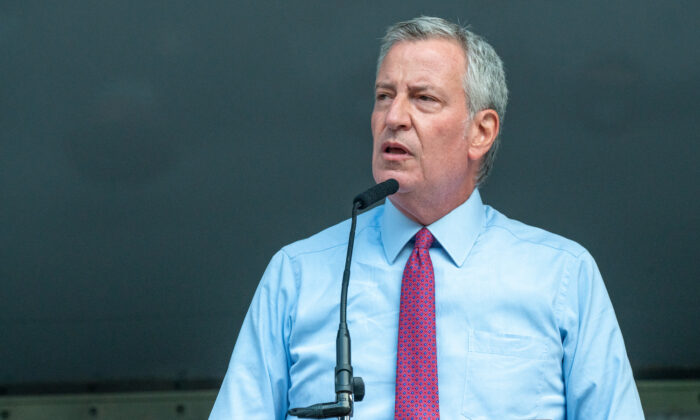 Former New York City Mayor Bill de Blasio has announced that he will make a bid for a rare, open seat in the city.

De Blasio made the announcement during a May 20 appearance on MSNBC’s “Morning Joe.”

“Joe, people are hurting, they need help fast, and they need leaders who can actually get them help now and know how to do it,” de Blasio said. “I do know how to do it from years of serving the people of this city. So today I’m declaring my candidacy for Congress in the tenth congressional district of New York.”

De Blasio served as mayor of New York City for two terms, but was ineligible to make another run for the spot this year.

In December 2021, just before leaving office, de Blasio instituted one of the most wide-reaching vaccine mandates in the nation, requiring that all New Yorkers five years old and up show proof of vaccination to enter indoor dining, fitness, and entertainment establishments.

De Blasio’s move to pursue an election bid was not unexpected.

In a May 18 post on Twitter, de Blasio announced that he had started an exploratory committee for a congressional run.

He wrote: “Our neighborhoods need help as we recover from COVID. Our nation needs help as democracy is threatened and working people struggle. I am ready to serve to continue the fight against inequality. Today I am forming an Exploratory Committee for the new #NY10.”

Nadler, who has long held the seat, announced that he will vacate it in advance of the 2022 midterms and will instead pursue a reelection bid in the 12th district against former Democrat Rep. Carolyn Maloney.

De Blasio, whose COVID-19 policies brought him to national attention during his mayorship, is the most prominent of likely contenders. Other possible challengers include an array of state-level legislators.

However, de Blasio may have some trouble winning support in the newly-drawn district, whose boundaries are set to be finalized on May 20.

The district includes substantially few black voters, who provided a core base that helped to propel de Blasio to victory during his two bids for mayor.

“Bill de Blasio destroyed NYC and now wants to do the same to the entire country,” Steven Crowder wrote in a tweet. “Would anyone actually vote for this communist? Even leftists don’t want him there. Oh, also, his name is Warren Wilhelm Jr., not Bill de Blasio.”

“No one wants this. No one asked for this. No one is excited about this. No one benefits from this,” wrote conservative radio host Jason Rantz in another tweet. “Why won’t Bill de Blasio just go away?”

Mary L. Trump, a niece of President Donald Trump who has been outspokenly critical of him, also criticized the move in a tweet.

The announcement is the latest bid by de Blasio to return to politics.

Earlier this year, de Blasio mulled over challenging fellow Democrat Kathy Hochul for the New York governor’s mansion, which she took up after disgraced former Gov. Andrew Cuomo was forced to resign.

Ultimately, de Blasio decided against the bid but hinted at future political aspirations, telling MSNBC “I am going to stay in public service, and I’ll have a lot more to say in the next few weeks, let’s put it that way.”