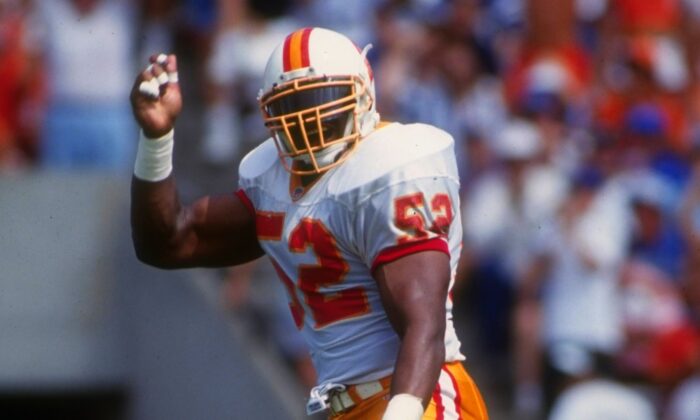 Linebacker Keith McCants of the Tampa Bay Buccaneers celebrates during a game against the Indianapolis Colts at Tampa Stadium in Tampa, Fla., on Oct. 4, 1992. (Scott Halleran /Allsport)
US News

A former NFL linebacker was found dead in Florida early on Thursday after an apparent drug overdose, police said. He was 53.

Keith McCants, the Tampa Bay Buccaneers first-round pick of the 1990 NFL Draft, was found dead inside his home in St. Petersburg.

Police responded to a 911 call at about 5:10 a.m. that was made by another resident who also lives at the location, the Pinellas County Sheriff’s Office told The Associated Press in an email.

“It appears it was a drug overdose, but we are awaiting confirmation from the medical examiner’s office,” sheriff’s spokesperson Amanda Sinni said. “This is still an open investigation.”

McCants, an Alabama native, played six seasons in the NFL with three different teams. His professional football career started in 1990 for Tampa where he recorded 12 sacks and assisted in 156 tackles.

The Buccaneers made him the fourth overall pick in the NFL draft the year after he was named an All-America in 1989 while playing for the Alabama Crimson Tide football program.

Following three seasons at Tampa, he played for the Houston Oilers and the Arizona Cardinals before ending his career in 1995. He then started as a radio broadcaster. He also served as a marine police officer in Alabama at the state Department of Conservation and Natural Resources.

McCants reportedly suffered from enduring drug addiction, depression, and financial ruin since leaving the NFL in 1995, AL.com reported. He also previously had several convictions on charges of possessing drugs and was homeless for more than two years.

In 2012, McCants was featured in the ESPN 30 for 30 documentaries “Broke,” in which he detailed his financial problems after his professional football career ended.

St. Petersburg mayoral candidate Robert Blackmon, a longtime friend of McCants, said he and others who knew him decided in 2010 to try to turn his life around.

“This morning, we lost that battle,” Blackmon said in a lengthy Facebook post, adding that McCants had renewed optimism after hip replacement surgery in May.

“We began to talk about his future again. The next 20 years. Buying a boat. His signature grin was back. But for every battle I could help him fight, there were others he had to face alone,” he said.