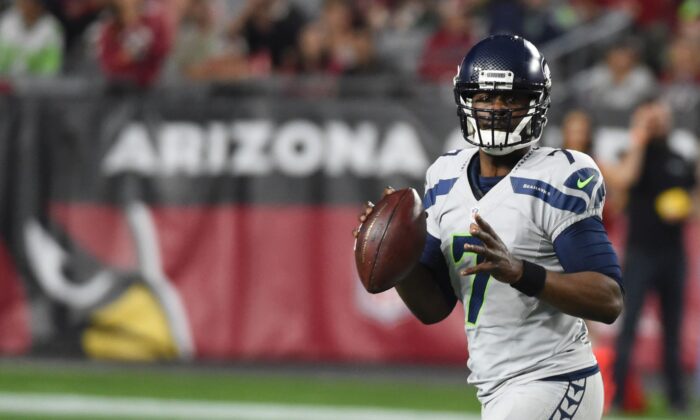 Jackson, 36, was involved in a single-vehicle crash at around 9 p.m. Sunday in Alabama, the Alabama Law Enforcement Agency told the sports news broadcaster.

The 2012 Chevrolet Camaro he was driving left the road and hit a tree before overturning, authorities said.

Jackson was taken to a nearby hospital and was later pronounced dead, officials said. Other details about his death were not revealed.

Among them was Russel Wilson, the quarterback for the Seattle Seahawks—where Jackson had played more than a decade ago.

“TJack… you will be missed. Praying for your family…Love you man,” Wilson wrote on Twitter.

TJack… you will be missed. Praying for your family…Love you man. 💔

Jackson played for the Minnesota Vikings between 2006 and 2010, starting in the Vikings Wild Card playoff game during the 2007-2008 season. He was primarily the Vikings’ backup during that time frame.

The Vikings issued a statement on his death shortly after it was reported on Monday.

“The entire Vikings family is saddened by the news of Tarvaris Jackson being taken from us too soon. One of Tarvaris’ greatest attributes was his positive outlook and approach. He genuinely cared about others, was a good friend and will be missed by family, teammates and Vikings fans everywhere. We send our deepest condolences to his family,” the team said.

RIP Tavaris Jackson. TJack was one of the best teammates and friends. Drafted together in 06’ and he will be missed. #skol #tavarisjackson

“My time with the Vikings was very special because the team embraced and welcomed me as one of their own,” Favre said in a statement via the Vikings. “Tarvaris could have been anything but welcoming, but [instead he] was pure class and as good a teammate as any I’ve played with. [I’m] proud to call him friend!! Such sad news.”

He signed with the Seahawks and started during the 2011 season before he was traded to the Buffalo Bills before returning back to the Seahawks as a backup for Wilson. During the 2013 season, the Seahawks won Super Bowl XLVIII. Jackson eventually retired in 2015.

Reports said he is survived by his wife and two children.