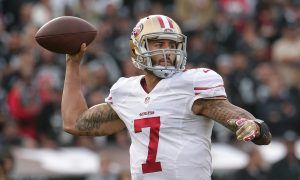 Ten former National Football League players have been charged with defrauding millions of dollars from the league’s health care plan that’s meant to benefit retired players and their families, according to Justice Department officials.

Former Washington Redskins running back Clinton Portis, 38, and former Redskins cornerback Carlos Rogers, 38, were among those who were charged with various fraud counts for their roles in the nationwide scheme, according to charging documents unsealed on Dec. 12.

The indictments allege that the players made more than $3.9 million in false and fraudulent claims to the Gene Upshaw NFL Player Health Reimbursement Account Plan for expensive medical equipment that was never purchased and never received.

Some of the equipment included hyperbaric oxygen chambers, ultrasound machines used by doctor’s offices to conduct women’s health exams, and electromagnetic therapy devices designed for use on horses, Assistant Attorney General Brian Benczkowski said during a press conference on Dec. 12.

The players’ alleged actions of “defrauding the Plan and treating it like their own personal ATM” had wider implications for the plan, because it risked the plan’s tax-exempt status and the ability of law-abiding retired players from receiving tax-free reimbursements for legitimate medical expenses for themselves or their families, Benczkowski said.

“This is an $800 million or so plan, intended to provide benefits to law-abiding former players and their families. And this conduct, if it had gone unchecked, threatened the tax-exempt status of the fund,” he said, adding that it could have potentially created problems for law-abiding players from access to benefits.

He said that the ringleaders of the scheme recruited other eligible former players by offering to submit or assist in submitting fake claims to the plan, in exchange for kickbacks ranging from a few thousand dollars to $10,000 or more for each claim. The size of each claim typically ranged from $40,000 to $50,000.

“When a defendant received his reimbursement check, he then kicked back the agreed-upon amount to the ringleader or recruiter,” Benczkowski said. “This process was repeated over and over again, placing the integrity of the plan at risk.”

The alleged fraud was halted after the appointed benefits administrator of the plan, Cigna, began detecting some of the claims and refused to pay them.

“Those who perpetrate scams to steal taxpayer dollars from intended beneficiaries threaten the viability of critical health care programs. We are committed to rooting out these fraudsters,” FBI Special Agent in Charge George Piro of the Miami Field Office said at the press conference.

Officials said the investigation is continuing, and could lead to additional arrests and charges if further evidence is found.

The NFL Players Association told The Epoch Times that they “do not have comment on this issue at this time.”