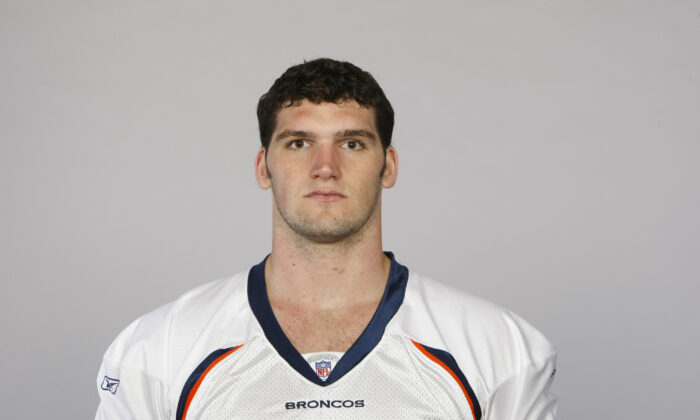 In this photo provided by the NFL, Paul Duncan of the Denver Broncos poses for his 2010 NFL headshot circa 2010 in Englewood, Colorado. (NFL via Getty Images)
NFL

Former NFL Player Dies at 35 After Suffering Cardiac Arrest ‘While on a Run’: Family

A former Notre Dame Fighting Irish football star who also played in the NFL with the Denver Broncos as an undrafted free agent died last week, according to his family. He was 35.

Paul Duncan’s wife, Ellen, confirmed in a July 16 statement on social media that her late husband’s heart suddenly stopped beating on July 15 “while on a run in our neighborhood.”

“Today he was pronounced brain dead,” Ellen said on Instagram. “We will have a medical examination to understand [the] cause of death.”

Ellen added that Duncan’s body will be “donated to people in need of organs and to medical research.”

Duncan played as an offensive lineman for the Fighting Irish from 2005 to 2009, ND Insider reported. He then briefly played with the Denver Broncos as an undrafted free agent.

The intercollegiate football team representing the University of Notre Dame in Indiana also confirmed Duncan’s sudden death, offering condolences to the family and friends of the former Fighting Irish star.

“Our prayers go out to the family and friends of Paul Duncan,” the team said. “A great teammate, but more importantly a loving husband and father.”

Duncan is survived by his wife and two daughters.

Our prayers go out to the family and friends of Paul Duncan.

A great teammate, but more importantly a loving husband and father. pic.twitter.com/8VEDBy2nYf

The NFL has recently suffered a string of losses. Duncan is at least the fourth former NFL player who has recently passed away, others include Charles Johnson, Marion Barber, and Jimmy Williams.

Johnson was found dead in his North Carolina hotel room on July 20. The cause of his death was unknown as of Friday.

The 50-year-old former wide receiver played for the New England Patriots in 2001 when they won the Super Bowl. He also played nine NFL seasons for the Pittsburgh Steelers, Philadelphia Eagles, and Buffalo Bills.

Barber, who spent much of his professional career playing for the Dallas Cowboys, reportedly died of a heat stroke at age 38. His body was discovered by police on June 1 after they conducted a wellness check at a Frisco apartment leased by the former star.

Investigators said in a full autopsy report obtained by TMZ Sports that exercise equipment was discovered at Barber’s home, where he appeared to have been exercising in “sauna-like conditions.”

According to the documents, police found the body of Barber with the thermostat set at 91 degrees and the heat set to “on.”

Medical examiners said they didn’t find evidence of trauma or drug overdose inside Barber’s body, and “no clear evidence of natural disease” was found either.

Williams, a former Vanderbilt Commodores star and NFL defensive back/kick returner, died on July 8 at age 43 after suffering from an unspecified illness. He is one of three players in Vanderbilt history with both a kickoff return and punt return touchdown during their careers.

“Jimmy will be remembered for the energy and spirit with which he filled a room, the love and devotion he showed to his beautiful family and the choices he made every day to live fully in the face of the most challenging adversity life has to offer,” Clark Lea, the current Vanderbilt coach, wrote on Twitter.

Hundreds of people attended a memorial service at Episcopal High School, where Williams was a four-sport athlete. After graduating from Episcopal in 1997, the Baton Rouge native attended Vanderbilt University.

Williams’ 7-year stint in the NFL included a 2005 Super Bowl appearance with the Seattle Seahawks.