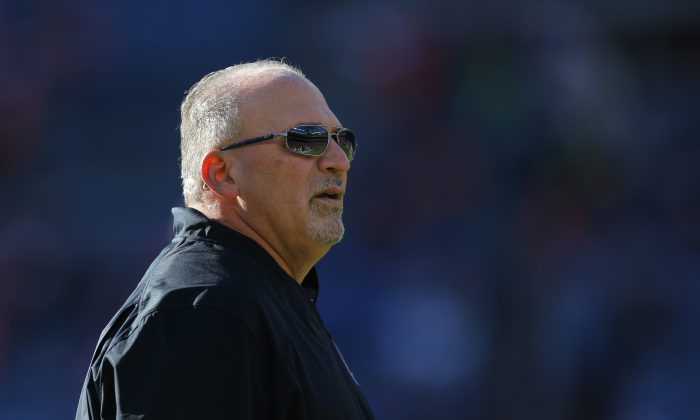 Tony Sparano looks on as his players warm up before a game on December 28, 2014 in Denver, Colorado. (Photo by Justin Edmonds/Getty Images)
Entertainment News

The Minnesota Vikings said on Sunday that Sparano “unexpectedly passed away early this morning.” He was the Vikings’ offensive line coach.

“Our hearts go out to Jeanette and the entire Sparano family as we all mourn the loss of Tony. Tony was a passionate and driven individual who cared deeply about his family, and especially enjoyed spending time with his grandchildren. Tony’s presence within the Vikings organization will be deeply missed. We are only thinking of Tony’s family during this incredibly difficult time. We ask that the entire NFL and Vikings family keep the Sparanos in their thoughts,” Vikings Owners Mark and Zygi Wilf said in a statement.

The Miami Dolphins also issued a statement on his passing. “Tony made an indelible impact on our team’s history,” CEO Stephen Ross said. “His toughness, grit, and leadership were evident to everyone who had the chance to coach with or play for him,” he added.

The Raiders also wrote: “The Raiders family was deeply saddened to learn of Tony Sparano’s passing this morning. Tony had a deep passion for football and was embraced by the Raider Nation during his time with the Silver and Black. Tony will be sadly missed by the entire NFL community. Our hearts are with Jeanette and the Sparano family during this extremely difficult time.”

An ESPN reporter Adam Schefter tweeted that “Sparano complained about chest pains this weekend and went to hospital Thursday. Doctors did tests, but released him Friday.” He said that “Sparano and his wife, Jeannette, were about to leave for church this morning when she found him unconscious in their kitchen,” adding that she tried CPR but he couldn’t be revived.