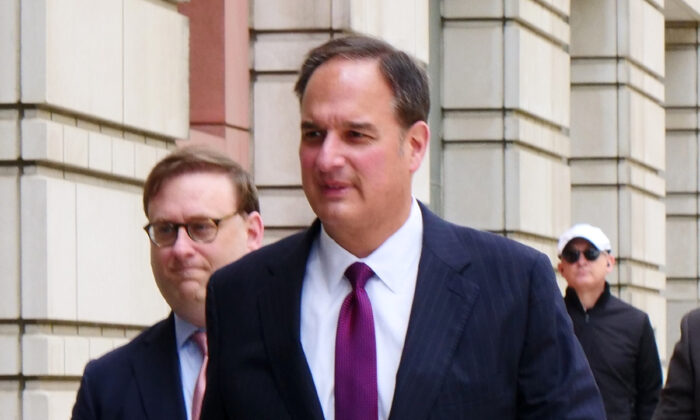 Former New York Times reporter Eric Lichtblau has asked a judge to excuse him from testifying about certain topics when he takes the stand in Special Counsel John Durham’s case against Michael Sussmann, a lawyer for Hillary Clinton’s 2016 presidential campaign.

In a motion (pdf) filed May 12 in the U.S. District Court for the District of Columbia, Lichtblau’s attorney Chad Bowman asked that Lichtblau be protected from being forced to provide testimony on some matters unrelated to the case.

According to the indictment against Sussmann, Lichtblau had communicated with Sussmann before Sussmann met with FBI officials on Sept. 19, 2016. Statements made by Sussmann to the FBI at the time form the basis for the charge of making a false statement to the FBI.

On Oct. 31, 2016, the New York Times published an article by Lichtblau titled “Investigating Donald Trump, F.B.I. Sees No Clear Link to Russia.” An affidavit revealed that Sussmann was the “confidential source” for the report.

However, Sussmann waived this confidentiality request and subpoenaed Lichtblau to testify on his behalf at the trial, thus pulling the reporter further into the case.

“Through counsel, Mr. Lichtblau promptly raised his concerns about protecting other, privileged and still-confidential news sources and unpublished newsgathering information. Counsel for Mr. Sussmann ultimately agreed to limit the scope of questioning at trial to the communications between Mr. Sussmann and Mr. Lichtblau—i.e., information subject to the waiver,” the motion states.

“Such communications conceivably may be relevant to what Mr. Sussmann knew on September 19, 2016, and therefore whether he knowingly made a materially false statement to the FBI.”

However, Durham refused to limit the scope of questioning. On May 2, the prosecution said that it could not provide “any assurance” that the cross-examination which Lichtblau would have to undergo would be confined to his communications with Sussmann.

Though Lichtblau has said he is comfortable testifying due to the confidentiality waiver offered by Sussmann, he is not happy with the possibility that the special counsel might pursue questioning that could identify other confidential news sources.

As such, “Mr. Lichtblau respectfully submits this motion seeking to limit the scope of any trial examination to Sussmann Communications Testimony alone.”

Sussmann’s meeting with the FBI in September 2016 came about six weeks before Election Day in the presidential race between Clinton and Donald Trump. He met with then-FBI general counsel James Baker, providing data that allegedly linked Trump to a Russian bank.

Durham’s investigation and a later grand jury concluded that Sussmann had not told Baker during the meeting that he was representing two clients—the Clinton campaign and a tech executive.

“Sussmann’s false statement misled the FBI General Counsel and other FBI personnel concerning the political nature of his work,” Durham’s team argues, according to CBS News.

Judge Christopher R. Cooper, an Obama appointee, has given Durham’s team until May 17 to respond to Lichtblau’s motion.