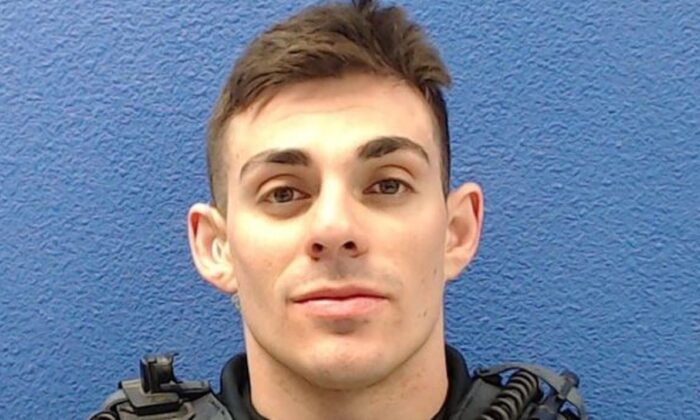 A former New Mexico police officer was charged with second-degree murder Thursday following an incident in which a detainee died after being placed in a chokehold.

On Feb. 29, then-Las Cruces Police Department Officer Christopher Smelser placed Antonio Valenzuela in what reports describe as a vascular neck restraint. Valenzuela, who died at the scene, fled during a traffic stop and was apprehended following a foot chase.

An autopsy report cited by KOB4 said Valenzuela died from asphyxial injuries, noting also that he had meth in his system, which “significantly contributed” to his death.

Following the chase, Smelser could be heard on police video obtained by the Associated Press as saying, “I’m going to [expletive] choke you out, bro.”

“Smelser held Mr. Valenzuela in a choke hold for two minutes, during which Mr. Valenzuela made gurgling noises commonly heard when someone is being choked to death as a result of a neck restraint being applied incorrectly,” wrote Sam Bregman, the attorney representing Antonio Valenzuela’s family, in a letter to Mark D’Antonio, a District Attorney at the Dona Ana County District Attorney’s Office, a copy of the letter obtained by CBS shows.

In the letter, Bregman called for charges against Smelser, who was fired and initially charged with involuntary manslaughter, to be upgraded to second-degree murder.

State Attorney General Hector Balderas said in a press release Thursday (pdf) that his office had taken over Smelser’s prosecution from the Dona Ana County District Attorney’s Office and that the former officer would now be facing charges of second-degree murder.

“We are taking over prosecution and focusing on appropriate charges for violent and dangerous chokeholds,” Balderas said in the statement.

Smelser’s attorney, Amy L. Orlando, suggested to The Associated Press that the new charge was a political move meant to grab headlines.

“Officer Smelser used a technique that was sanctioned by the department. He was trained in the technique. And all of a sudden it’s banned after and he’s a criminal,” Orlando told the publication.

A charging document (pdf) alleges that Smelser “did kill Antonio Valenzuela without lawful justification or excuse, and without sufficient provocation, upon a sudden quarrel, or in the heat of passion, and the defendant knew that his acts created a strong probability of death or great bodily harm.”

The revised charge comes amid a wave of protests calling for reform to police tactics, many specifically targeting chokeholds, sparked by the May 25 police-custody death of George Floyd.

To date, at least 20 U.S. cities and municipalities had either banned the tactic in policing, or started to impose chokehold bans, CNN reported.

Attorney General William Barr said in June that he supports a prohibition on the use of chokeholds by police unless officers are confronted with “potentially lethal force.”