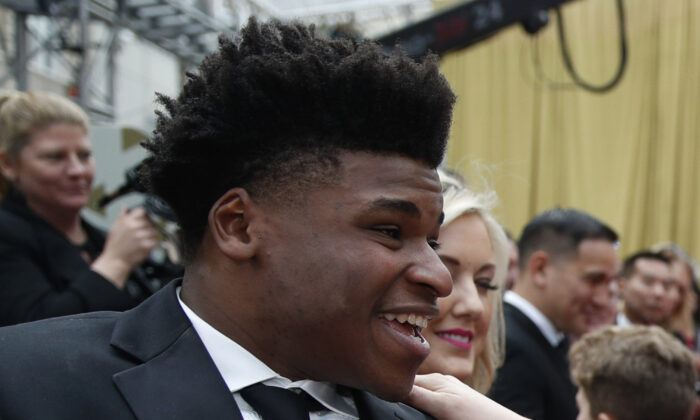 Jerry Harris talks to an actress on the red carpet at the Oscars at the Dolby Theatre in Los Angeles, Calif., on Feb. 9, 2020. (John Locher/AP Photo)
Crime and Incidents

A star of a Netflix series about young cheerleaders was sentenced on July 6 to 12 years in prison.

U.S. Judge Manish Shah, an Obama appointee, handed down the sentence in federal court in Chicago.

Harris, a surrogate for then-candidate Joe Biden, was arrested in 2020 after authorities said he sent explicit videos and photographs to a young boy and solicited explicit materials from the male.

Harris pleaded guilty in February to one count of receipt of child pornography and one count of traveling with the intent to engage in illegal sexual conduct.

In the plea agreement, Harris admitted that he received the explicit materials from the boy in exchange for $2,000. He also said he asked for and received child pornography from two other young boys, and traveled from Texas to Florida in 2019 to meet a 15-year-old boy, who he sexually assaulted.

Harris is a “child predator” who “took advantage of a power imbalance to sexually exploit his young victims,” prosecutors said in one filing.

That power was derived in part from Harris’s role in the Netflix series “Cheer,” they added.

Harris was removed from the show’s cast after his arrest.

Harris faced up to 50 years in prison.

Prosecutors requested 15 years in jail, followed by 10 years of supervised release, due to factors such as what was termed a “traumatic” childhood.

Lawyers for the defendant said he should only receive a 72-month sentence, due to being sexually abused as a minor and other problems that took place when he was younger.

In court, Shah told Harris to consider the sentence an “expression of the seriousness of your crimes, tempered with some hope that all is not lost for you or for your victims, and that in the future some healing can occur.”

During the sentencing hearing, before the sentence was announced, Harris apologized.

“I am deeply sorry for all the trauma my abuse has caused you. I pray deep down that your suffering comes to an end,” he said to the boys he preyed upon.

“I’m not an evil person,” Harris said. “I’m still learning who I am and what my purpose is.”

Sarah Klein, an attorney for two of the victims, issued a statement saying Harris’s guilt was “firmly established.”

“The sentence he received reflects the severity of his crimes and the lifetime of pain his victims will suffer,” Klein said.