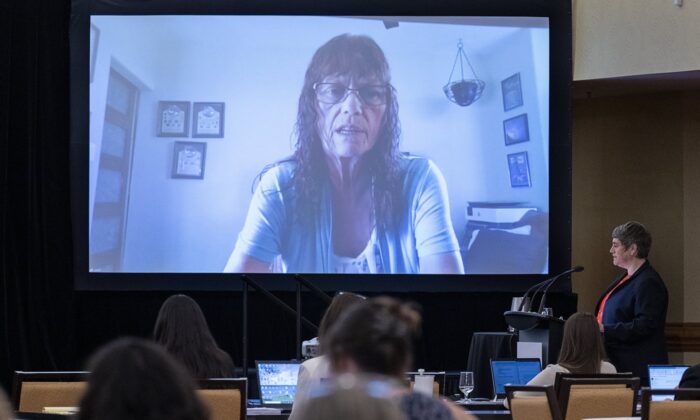 Brenda Forbes, a former neighbour of Gabriel Wortman in Portapique, N.S., is questioned by commission counsel Emily Hill, right, at the Mass Casualty Commission inquiry into the mass murders in rural Nova Scotia on April 18/19, 2020, in Halifax on July 12, 2022. (The Canadian Press/Andrew Vaughan)
Canada

A former neighbour of the man who carried out the 2020 Nova Scotia mass killing stood by her story on Tuesday that RCMP did “nothing” when she reported a violent domestic assault years before the rampage.

Brenda Forbes said, “You bet,” when she was asked at a public inquiry if she still holds that view, despite a differing story from the RCMP investigating officer at the time.

Forbes, a military veteran in her 60s, testified under oath at a public inquiry that she’d told two “young” constables about a violent assault by the killer against his spouse, Lisa Banfield, in the summer of 2013, and that she and her husband had seen weapons at the killer’s home.

In previous statements to media after the April 2020 murders of 22 people, Forbes had said the RCMP didn’t follow up after hearing her account when she met them at her workplace in Debert, N.S.

Forbes told the inquiry Tuesday that she’d been told about the assault by the killer’s uncle, Glynn Wortman. She said she’d called Glynn Wortman in front of the officers, put him on speakerphone, and that the uncle refused to speak directly to them because he feared Gabriel Wortman would kill him.

“Nothing was ever done. Nothing. Zip,” she testified on Tuesday.

Retired RCMP constable Troy Maxwell told the public inquiry in an interview that when he spoke to Forbes on July 6, 2013, it was a complaint about the killer “tearing around” the neighbourhood in an unmarked police car. Maxwell hasn’t yet testified under oath.

However, his handwritten notes from July 6, 2013, entered as evidence include the name of Glynn Wortman as well as those of Forbes and Gabriel Wortman, with “Lisa” written in brackets in the margin. Questioned by inquiry investigators, Maxwell said he didn’t know who Glynn Wortman was and that he wrote down “Lisa” because Forbes had said that was the name of Gabriel Wortman’s wife.

Glynn Wortman provided police with an account of the assault when he spoke to them in May 2020, saying he and a couple of friends were drinking beer at Wortman’s property, and he left after Wortman made a crude comment about Banfield.

The uncle said he went to check on Banfield a while later, because he knew Wortman was “off the rails,” and as he approached through the woods to Wortman’s property he saw him straddling on top of her, “strangling her, choking the s–t out of her.”

During cross-examination by a lawyer for the federal Justice Department—which represents the RCMP—Forbes said that though the killer threatened her after she reported the assault, she didn’t call police again.

“The reason I didn’t report this to the police was … I lost a lot of respect for the police. I didn’t think anything would ever get done,” she testified.

Forbes also testified her first awareness of Wortman’s domestic violence was in the years after they moved to Portapique in 2002, when Banfield came to her door and asked for help after she’d been assaulted by the killer. Forbes said she encouraged her neighbour to seek help but recalled that she was frightened of her partner, who had threatened her family.

“She was definitely afraid he would go after her,” she said, testifying from her home in Alberta.

George Forbes, Brenda’s husband, hasn’t given sworn testimony. However, he has said in an interview that at one point when the couple were in Wortman’s garage in 2002 or 2003, Wortman opened up “a couple of boxes” containing firearms. He said the weapons “weren’t your normal weapon you’d buy at a gun show,” and they looked like handguns.

The RCMP did not seek a search warrant for weapons at Gabriel Wortman’s residence before the mass shooting, according to evidence presented to the inquiry to date.

Evidence has been presented that in 2010, after Glynn Wortman reported to police that his nephew was threatening to kill his parents in Moncton, N.B., police decided against seeking a search warrant because it had been more than five years since the killer’s father, Paul Wortman, had seen weapons in the residence.

Brenda Forbes testified that after she reported the assault of Lisa Banfield to police, her fear of the killer grew, and she and her husband decided to sell their home, moving first to Truro, then to Halifax and—after encountering the killer in Halifax—to Alberta.

Forbes became emotional as she testified over her regrets at not telling the purchasers of her home, John Zahl and Joanne Thomas, about the danger she believed Gabriel Wortman posed to the community.

“The people that bought it, he killed them and he burnt the house down,” she said.