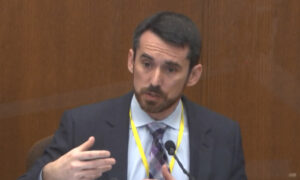 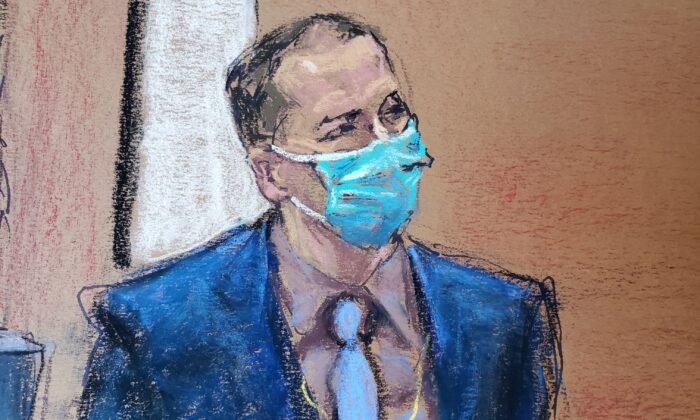 In this courtroom sketch, former Minneapolis police officer Derek Chauvin rises to greet jury members during his trial in Minneapolis, on April 13, 2021. (Jane Rosenberg/Reuters)
US News

Former Minneapolis police officer Derek Chauvin on April 15 invoked his Fifth Amendment right against self-incrimination and declined to testify in his trial in the death of George Floyd.

Chauvin took a microphone and was asked by his lawyer, Eric Nelson, if he understood that he had a right not to take the stand.

The former officer also said he knew that he could waive that right and answer questions, but that if he did, he would be subject to cross-examination by prosecutors.

Nelson advised the former officer that it was up to him whether to testify.

“I will invoke my Fifth Amendment privilege today,” Chauvin said in the Hennepin County court.

County Judge Peter Cahill emphasized to the defendant that he had to make the decision himself and that he shouldn’t be influenced by Nelson.

Chauvin told the judge it was his choice and he was not under any threats or promises to testify or not.

“I’m convinced then that this is your personal decision and you are aware of your rights,” the judge said.

The judge offered to read a set of sentences to the jury in regards to Chauvin’s decision, which would explain to jurors that Chauvin had no obligation to prove innocence, that he had the right not to testify, and advise them not to make any inference about the decision. Chauvin said he would like the script to be read.

Chauvin was one of four officers to respond to a 911 call regarding the use of counterfeit money at Cup Foods in Minneapolis. After Floyd resisted being placed into a patrol car, he was restrained on the ground by Chauvin and two other officers. Chauvin knelt on his back and neck. Floyd eventually stopped breathing and was declared dead.

The three other officers will go on trial on lesser charges later this year.

Prosecutors wrapped their defense earlier this week. Nelson has been calling witnesses. On April 14, one testified that Floyd’s death should be classified as “undetermined.”

“In my opinion, Mr. Floyd had a sudden cardiac arrhythmia due to his atherosclerosis and hypertensive heart disease … during his restraint and subdual by the police,” Dr. David Fowler, who previously headed a medical examiner’s office in Maryland, told the court.

A man in Floyd’s vehicle when officers first located them also invoked his Fifth Amendment right this week.

Morries Hall told the judge that he was “fearful of criminal charges going forward.”