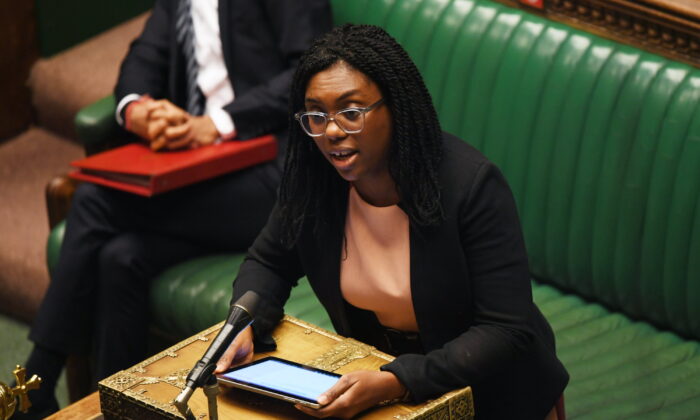 The ex-equalities minister and Tory leadership hopeful Kemi Badenoch has claimed that she fought a battle with civil servants over the axed children’s gender clinic which has been accused of rushing vulnerable children into treatment.

Kemi Badenoch wrote an article in The Sunday Times of London that claimed that officials told her not to meet whistleblowers and child patients while undermining her enquiries with leaks.

On Thursday, it was announced that the Tavistock Centre in London, which runs England’s only NHS gender identity development service (GIDS) is to close.

A rise in gender dysphoria cases in children means that the NHS is moving to a new model with “strong links to mental health services.” In 2021/22 there were over 5,000 referrals to the clinic, which compares to just under 250 referrals in 2011/12.

An official report in February found issues around safety at the clinic, expressing deep concerns about the affirmative model, concluding that primary and secondary care staff have had to adopt an “unquestioning affirmative approach.”

Badenoch said that the NHS gender identity service (GIDS) for young people was presented to her by government officials as “a positive medical provision to support children.”

She added that she was told by civil servants that was there “nothing to see here” and that “the Tavistock was getting unfair press.”

Civil servants are appointed officials of the UK Home Civil Service, which supports the work of the UK’s central government, and are meant to be politically impartial.

She added that she noticed officials “seemed to be consulting the same people and previous ministers had created an LGBT advisory panel that was clearly suffering from groupthink.”

She was also told that it would be “inappropriate” to speak to Keira Bell, 23, a woman who was given puberty blockers as a teenager after only three hours of consultation at the Tavistock Centre, and had a double mastectomy by the age of 20, but later came to regret it.

“This stems from a sincere, yet naive, belief that you can appease special interests with platitudes. The truth is some battles have to be fought and won.”

“This requires strengthening a civil service that is terrified of controversy and recalibrating it towards policy and away from posturing on issues it believes as too contentious,” added Badenoch.

Badenoch added that it “would be wrong to portray the entirety of the civil service as hostile on these issues.”

“Far from it. A small minority of activist officials are the tail wagging the dog, often to the dismay of their colleagues and the hand-wringing of far more senior officials,” she added.