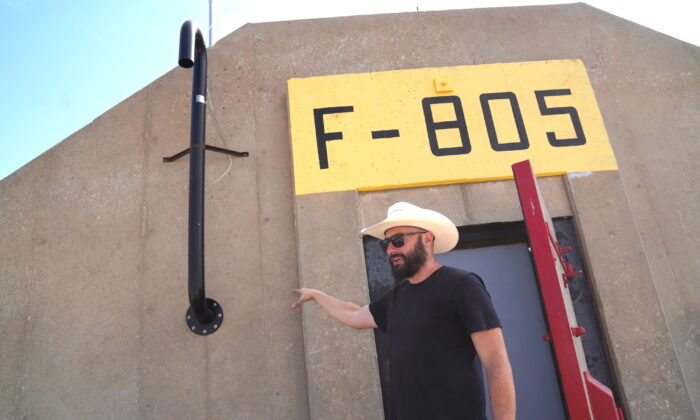 Dante Vicino, executive director and operations manager of Vivos xPoint, which is located on a former military base near Edgemont, S.D. The Vivos Group, which owns 575 bunkers, plans to convert them all into liveable homes. (Allan Stein/The Epoch Times)
US

Former Military Bunkers Are Home for Hundreds of Survival-Minded People

EDGEMONT, S.D.—Tom and Mary Soulsby of Georgia aimed to build their dream home in Tennessee as part of their plan to retire to a safe rural location following the 2020 riots and civil unrest.

The property had everything they desired: peace, dense forests, green pastures, and a duck pond. The home would have a cement basement. That way, they could rebuild on a solid foundation if the house was somehow demolished or burned down.

While doing online research on basements, Tom Soulsby said he must have entered “bunker” in the Google search by accident.

A link popped up to The Vivos Group, the owner and developer of Vivos xPoint, a massive home-conversion project involving 575 former military bunkers near the Black Hills area of South Dakota.

“I obsessed over it for about six months,” he said. “When they had an open house, I made plans to come out and see the place.”

After he and his wife visited the site in July 2021, they agreed there were huge advantages to living off the grid in a converted World War II bunker. All it needed was a decent interior makeover.

“The structure itself was a no-brainer,” Tom Soulsby told The Epoch Times.

The Soulsbys decided to sell their property in Tennessee—where he was an information technology worker and Mary was an accountant—and begin a new life together at Vivos xPoint.

“With current events and trends, they just reinforce that we made the right decision coming out here,” said Tom Soulsby, who now works as site manager at Vivos xPoint.

Who would ever want to live in a concrete bunker in the middle of nowhere, where the nearest Walmart is about a two-hour drive?

It isn’t far-fetched, given the social and political turmoil in the United States and worldwide, says Dante Vicino, executive director and director of operations at Vivos xPoint. His father, Robert Vicino, founded The Vivos Group in 2008 and started the Vivos xPoint project eight years later.

In terms of size and scale, xPoint is a project like no other; at about 18 square miles, it’s roughly three-quarters the size of the borough of Manhattan in New York. The aim is to develop a community of like-minded people concerned about what’s happening in the world.

The 7,000-acre development sits on the former Black Hills Army Base, built in 1942 by the Army Corps of Engineers to store bombs and other munitions during World War II. The Army retired the base in 1967 and sold the property and all 575 bunkers to the city of Edgemont, which, in turn, sold it to local cattle ranchers.

Dante Vicino said that past, developers had tried but failed to find a viable purpose for the base and its network of bunkers.

Then, in 2016, a group of ranchers contacted The Vivos Group offering to form a partnership to repurpose the site.

“When we realized the numbers made sense, and it was a lot better to own the land, we bought the whole thing out,” Dante Vicino said.

Vivos xPoint bills the project as “The Largest Survival Community on Earth,” located just south of Edgemont, within a 24-hour drive from virtually all points within the United States. It’s about a 30-minute drive from Wyoming. Denver is about five hours away, and Nebraska lies just to the south.

Vicino said the base is in one of the safest areas of North America at an altitude of 3,800-plus feet. It’s situated well inland from all large bodies of water, and about 100 miles from the nearest known military nuclear targets.

The bunkers stand like lonely sentinels in fields of golden grass in one of the quietest places you’ll ever find. Stop and listen, and all you hear is the sound of silence.

Vicino said many of the residents of Vivos xPoint prefer that kind of solitude.

“Even if nothing bad happens, this place is so unique and valuable, just because you can be off-grid and be in touch with the land and nature and polite society—clean air. You don’t get too much of that in the lower 48 [states],” he said.

And inside each 2,200-square-foot structure is a potential off-the-grid home with all the amenities of a modern house or condominium.

“You’re used to seeing multimillion-dollar bunkers, but they’re not necessarily for people like us. We wanted to bring that [homey] feel to it—that quality to the mass market.”

He said each igloo-shaped bunker is about 80 feet long and made of reinforced concrete nearly two feet thick, with a steel bunker front door to gain entry.

They call them “Hobbit homes” built into the hillside, like the movie shires. But they were made to withstand internal and external blasts like that of a nuclear bomb.

“People are interested in this for all kinds of reasons. Sometimes, it’s out of concern for what may happen in the future—just all the unknowns in this world. It seems to get scarier and scarier in a way. This [development] provides a solution for that. A big solution is to have a solid shelter with a solid roof over your head.”

Vicino, 29, isn’t your usual real estate executive. Standing about 6-foot-4, he wears a black T-shirt, denim jeans, a white cowboy hat, and a full beard. He packs a sidearm because he can.

After all, it’s South Dakota, a solidly red state where open carry is legal.

The name of the game at Vivos xPoint, Vicino said, is freedom, freedom, and more freedom. And lots of privacy: The bunkers are spaced about 400 feet apart, each one bounded by a 30-foot perimeter.

Within that space, tenants can do pretty much whatever they please within the lease, whether raising a garden, building a hothouse, or creating a small parking area or garage.

Vicino said tenants are encouraged to do their own exterior decorating. One tenant is using the roof of her bunker to grow vegetables.

“They talk about sanctuary cities. South Dakota is a sanctuary state for conservative people, military veterans, and police officers. Everybody that’s getting thrown under the bus by all the left-wing [activity] that’s happening. They’re all welcome here,” Vicino said.

Vicino isn’t just Vivos xPoint’s executive director. He’s also the owner of Bunker 850, where he spends about half his time between his home in San Diego and Vivos xPoint.

His bunker has all the amenities that one would expect in a modern ranch home or condo. It has a full-size kitchen area, office, four bedrooms, two bathrooms with shower and tub, a Smart television, a furnished den with leather couches, and a theater room. The interior decor is “mountain cabin.”

The only thing it doesn’t have is windows, although Vicino said he’s OK with that. He noted that the rounded ceiling a dozen feet high also takes some adjustment.

He said that one advantage to living in a concrete bunker is that he gets to produce electricity to power his home. He does this with a solar charger, propane, and diesel fuel generator system, automatically switching based on power consumption.

The company has leased more than 200 of the bunkers, some still in various conversion stages. The Vivos Group hopes to lease all 575 bunkers to create a self-contained community where more than 5,000 people will live.

Don, retired at 69, said he arrived from Minnesota in July. His bunker is nearly complete with furniture, laminate wood floors, electronic gadgets and appliances, and all the interior amenities that suit his lifestyle.

“I was in a nice home in St. Paul, and then they started burning down Minneapolis,” he said. “They went from stealing catalytic converters off cars in my neighborhood to a carjacking in the day.

“I thought, ‘You know what? This is stupid. Why am I living here?’ This was supposed to be one of the nicest places to live in the Twin Cities.”

Not long after, he watched a podcast featuring Robert Vicino and the Vivos xPoint project. He decided to “check the place out.”

“I just packed up everything and moved out here. Everything will be like I wanted it. I’ve got some chairs outside. At night I can go outside and look at the stars around me. I can see the Milky Way, like when I was a kid.”

Vicino said most of his tenants, like Don, are middle-class and lean conservative. He’s yet to see much interest in the project from liberals. For some reason, they can’t understand how anyone would want to live in a bunker, disconnected from the system.

“It used to be kind of fringe,” Vicino said about off-the-grid living. “You know how it is these days. It’s normal over the past couple of years to be concerned” about society collapsing.

“We have average middle-class families and the full spectrum of society. But the kind of person who wants to live out here takes a little something else. People have been doing it, picking up their lives and moving out here. It takes someone a little bit adventurous and nomadic,” Vicino said.

He said that the original settlers of Vivos xPoint call themselves “Xpoint Pioneers,” because one needs that kind of pioneer mindset.

“I love that we’re able to accommodate that,” Vicino said. “It also appeals to the type of person who wants to live off-grid and be kind of nomadic away from major urban centers.

“A couple of years ago, we had people moving out here because of the riots in the streets and burning of the cities and COVID. It was ridiculous. People just basically said, ‘I’m done with this. We’re moving.'”

Vicino said Vivos xPoint is no utopia and never will be. It is, however, evolving into something natural and organic.

One day, it may become a township, with a general store, medical facility, security station, fitness room, and post office, just like any town would have.

“I’m not trying to make a utopia here, [though] some people ask that,” Vicino said. “We’re not all sitting around the campfire drinking Kool-Aid and that sort of stuff. Everybody out here—we’re all real, normal people.”