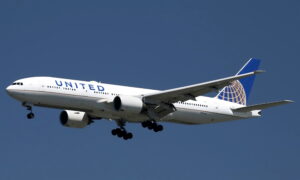 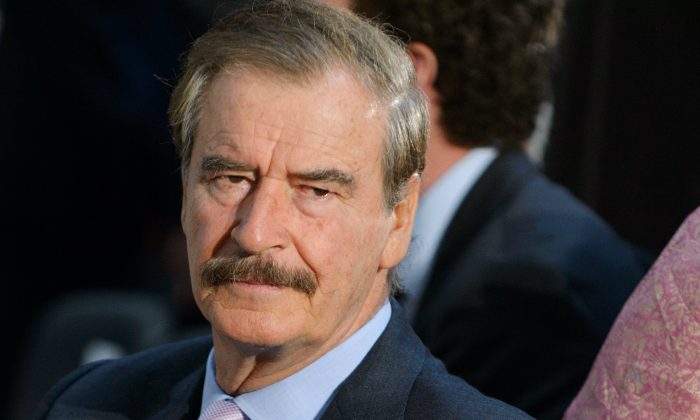 Former Mexican preisdent Vicente Fox is seen before the start of the Congressional Gold Medal presentation ceremony for Bangladeshi economist Muhammad Yunus on April 17, 2013 in the Rotunda of the US Capitol in Washington, DC. (Mandel NGAN/AFP/Getty Images)
US

Former Mexican president Vicente Fox apologized on May 4 for offending Donald Trump, however he says he has not changed his view of the presidential hopeful.

Fox had previously said in February that he would not pay for Trump’s “[expletive] wall.”

But he emphasized that he wasn’t the only one offended.

“If I offended you, I’m sorry. But what about the other way around?”

As recently as this week, Trump reiterated his vow to build a wall along the southern border to Mexico, if he becomes president. Last June, Trump caused widespread outrage when he said people coming to the United States from Mexico are “bringing drugs. They’re bringing crime. They’re rapists. And some, I assume, are good people.”

Fox also invited Trump to visit Mexico—comments that were widely criticized by people who said he had given in to Trump.

But Fox defended his remarks, saying he is still against the real estate mogul, and only invited him to Mexico so Trump could be educated.

“If I invite him to Mexico it’s to open his eyes, so he can wake up and see what the reality is in Mexico. To actually know and no to speak only to win electoral votes with people who listen because of fear,” said the former president in an interview with Radioformula.

Fox said the worst thing that can happen is for Trump to be president.

“This character is a real threat for the United States itself, for the world, and for our people here, he’s proposing a series of completely crazy ideas,” said Fox to Radioformula.

The former leader has been strongly campaigning against Trump in California, calling him a “false prophet.”

Meanwhile, Fox praised former secretary of state Hillary Clinton and said she is a great candidate.

On Twitter, Fox tweeted on May 5, “I maintain my position against the policies of @realDonaldTrump, let’s continue pushing to prevent this nightmare becoming reality.”

Fox made fun of Trump in a video with TMZ, saying no authentic Mexican dish can come from Trump Tower.

A Gallup poll from March 11, shows Trump has a 77 percent unfavorable rating with U.S. Hispanics.