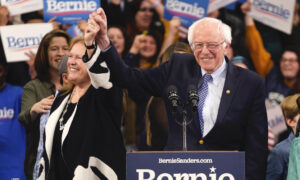 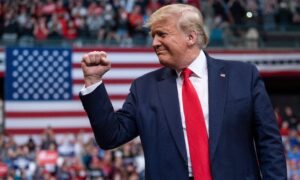 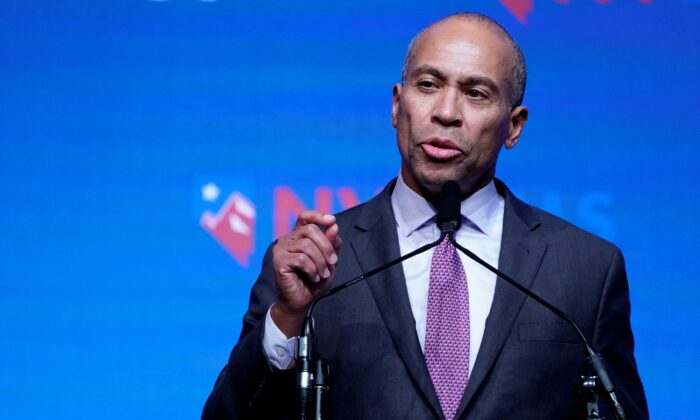 Deval Patrick appears on stage at a First in the West Event at the Bellagio Hotel in Las Vegas, Nevada on Nov. 17, 2019. (Carlo Allegri/Reuters)
2020 Election

Former Massachusetts Gov. Deval Patrick became the third Democratic presidential contender to end his campaign within 24 hours after a poor showing in the Iowa caucuses and New Hampshire primary.

“The vote in New Hampshire last night was not enough for us to create the practical wind at the campaign’s back to go on to the next round of voting. So I have decided to suspend the campaign, effective immediately,” Patrick wrote in a statement.

Patrick, 63, was one of the latest entries to the 2020 field, not announcing his bid until November 2019. Only former New York City Mayor Michael Bloomberg, 77, joined the race later. Bloomberg, a billionaire, has dropped hundreds of millions of dollars on his campaign.

Patrick, who never qualified for a Democratic presidential debate, had said in December 2018 that he would not run for the presidency.

Patrick struggled to gain support and generated virtually no votes in either Iowa or New Hampshire. He was the last African-American in the race after Sens. Cory Booker (D-N.J.), 50, and Kamala Harris (D-Calif.), 55, exited late last year or earlier this year.

Entrepreneur Andrew Yang, 45, another minority, ended his bid late Wednesday as votes were still being counted in New Hampshire.

“I am the math guy, and it is clear tonight from the numbers that we are not going to win this race,” Yang said.

And Sen. Michael Bennet (D-Colo.), 55, told supporters he was ending his campaign and would pivot to trying to boost candidates for the U.S. Senate as well as the eventual Democratic presidential nominee.

They appeared to be the only three candidates to earn delegates from New Hampshire. Sanders and Buttigieg were tied with nine and Klobuchar had six.

The Iowa Democratic Party awarded Buttigieg 13 delegates this week after the Feb. 3 caucuses, which were plagued with issues due to an application. Sanders received 12 delegates, Warren got 8, Biden received 6, and Klobuchar earned 1.

But the campaigns for Buttigieg and Sanders filed requests for a recanvass of the results. The Sanders campaign said there were “errors and inconsistencies” and alleged that the results would change if they were fixed. At stake was the delegate that will be awarded to the overall winner of the race.