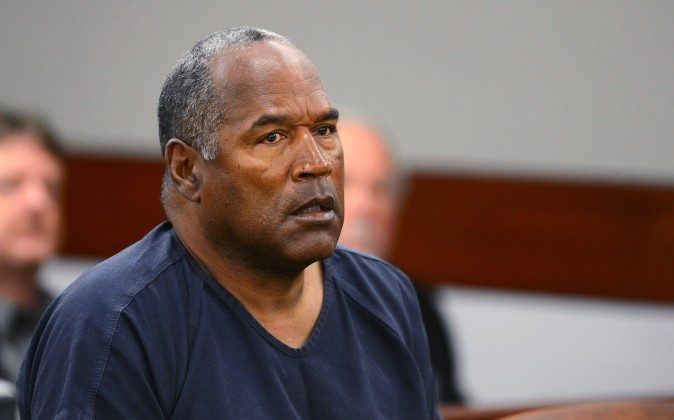 In this May 14, 2013, file photo, O.J. Simpson appears at an evidentiary hearing in Clark County District Court in Las Vegas.(Ethan Miller via AP, Pool)
US News

A former manager of O.J. Simpson, the NFL Hall of Famer acquitted in the killing of his wife and another man in the 1990s, said he “didn’t act alone” in the alleged murders.

Norman Pardo said he’s making a documentary about the infamous murders of Nicole Brown and Ron Goldman, and he’s making the argument Simpson had an accomplice, the New York Post reported on Nov. 27.

“For the first time, the most thorough investigation into the murder ever conducted will be shared with America,” said Pardo, who added that he has 70 hours of footage of Simpson that nobody has viewed.

“We have assembled a team of internationally renowned criminal investigators, experts, and lawyers,” he told the publication. “And they believe they can not only prove Simpson was involved in their deaths — but for the first time reveal he had at least one accomplice.”

He said he’s developing the film with co-executive producer Dylan Howard, who has produced “An American Murder Mystery” and the series “National Enquirer Investigates.”

Pardo didn’t elaborate on who he thinks the alleged accomplice might be or how they helped.

Pardo, meanwhile, was a friend an former manager of Simpson, saying he worked with Simpson after his acquittal in 1995.

Simpson, 71, was released from a Nevada prison in 2017 after serving nine years for a failed robbery in Las Vegas.

During the release, the Nevada Department of Corrections posted a seven-second video on Facebook showing the retired American football star and former actor being released at 12:08 a.m. local time, Reuters reported at the time. The midnight timing was “to ensure public safety and reduce the potential for incident,” the department said in a brief statement that accompanied the video and a photo showing Simpson signing some papers.

After he was found not guilty in the 1995 slayings, following a 13-month trial in Los Angeles that drew international headlines, a civil court subsequently found him liable for $33.5 million in damages to the victims’ families, Reuters noted.

“I’m in a car for the last five hours so how do I know how it feels to be out?” he said through an open window last year after he was released. A man asked him a question, calling him by his nickname, “Juice.”

“None of your business,” when he was asked about where’s going now.

Simpson apparently was in Florida recently, and the Daily Mail published photos of him in St. Petersburg on Nov. 24. “While in Florida, Mr. Simpson is required to adhere to his parole conditions and remain in contact with his parole officer in Nevada,” Florida Department of Corrections spokesman Patrick Manderfield told the Tampa Bay Times. The Nevada Department of Corrections said it gave Simpson an out-of-state travel permit from Nov. 17 until Nov. 24. It means he will have to go back to Nevada, where he has been living, the report said.

Simpson’s son Justin is a realtor in Florida, and his daughter Sydney also lives nearby.