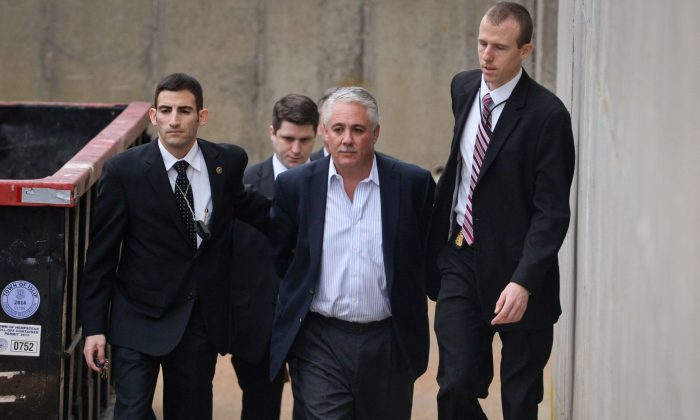 Former Suffolk County Police Chief James Burke is escorted to a vehicle by FBI personnel outside an FBI office in Melville, N.Y. on Wednesday, Dec. 9, 2015. Prosecutors didn't immediately announce charges, but Burke had been under scrutiny for years over an allegation that he beat a prisoner in 2012. He resigned from the force in October. (Steve Pfost/Newsday via AP) NYC LOCALS OUT; MANDATORY CREDIT Newsday photo by Steve Pfost
US

The former head of one of the country’s largest local law enforcement agencies was arrested for allegedly beating up a man who had broken into his SUV.

Former Suffolk County Police Chief James Burke was taken into custody by federal agents at his Long Island home on Wednesday, Dec. 9, according to a news release from the FBI’s New York field office. Burke faces charges of violating the man’s rights and conspiracy.

The U.S. Attorney for the Eastern District of New York, Robert Capers, said Burke drove to the Suffolk County Police Department’s office in Smithtown in 2012 as detectives were interrogating Christopher Loeb for a series of thefts. With Loeb handcuffed to an eyebolt, Burke allegedly punched and kicked him in the head and body. Loeb was taken into custody for stealing items from more than a dozen vehicles, including items from Burke’s SUV.

The items he allegedly took from Burke’s vehicle were “his gun belt, several magazines of ammunition, a box of cigars, a humidor, and a canvas bag that contained toiletries, clothing, and other items,” the news release stated.

A grand jury has been hearing the case against Burke for several months.

“We entrust our law enforcement officials with the tremendous responsibility to uphold the Constitution and protect the communities they serve as they enforce the law. Wearing a badge is a privilege and honor—not a license to exact retribution and corrupt the administration of justice,” Capers said in a statement. “We will protect the rights of all no matter where the evidence may lead, and those who break the law will be held to account regardless of their rank and status.”

Capers said Burke, even while under investigation, met with officers involved with Loeb’s arrest “to agree on ways to get their stories straight.”

“And by getting their stories straight I mean having everybody agree on a story that in some way hid the fact that Burke assaulted Loeb,” he said.

Capers said Burke influenced an officer to testify under oath that Burke did not assault Loeb. That officer was not immediately identified, nor was it clear whether the officer will face charges.

If convicted, Burke faces as long as 5.5 years in a federal prison.

Loeb’s attorney, Amy Marion, said in a statement that her client will continue to cooperate with investigators. “We are gratified that this long overdue prosecution has begun and we look forward to seeing that justice is done,” she said.

Prior to his sudden retirement in October, Burke had been on the police force for 30 years.