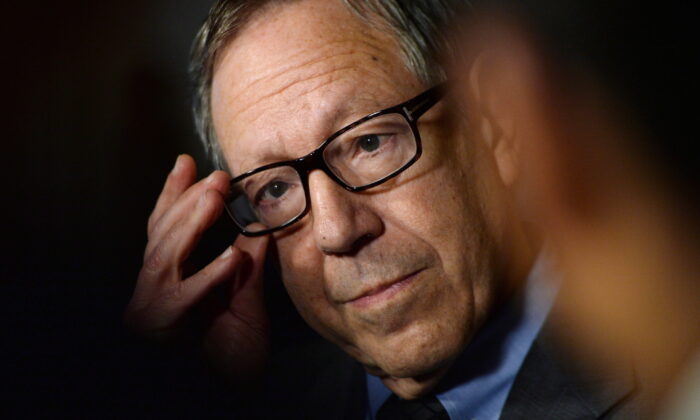 Liberal MP Irwin Cotler holds a press conference in the House of Commons foyer in Ottawa on March 26, 2015. (The Canadian Press/Sean Kilpatrick)
Canada

Former justice minister and attorney general Irwin Cotler is asking how a government-funded organization aimed at fighting racism could have hired a senior consultant with a history of making derogatory comments against the Jewish community.

“I’m pleased that the government has decided to terminate the grant to CMAC and its senior consultant Laith Marouf. His hateful, bigoted and antisemitic comments, are, as I’ve said before, beyond the pale,” he wrote in a series of posts on Twitter on Aug. 22, referring to the Community Media Advocacy Centre.

“The question remains: how was the grant even accorded to begin with? Over 100 of his posts have been compiled with these hateful, bigoted comments.”

1/6 I’m pleased that the government has decided to terminate the grant to CMAC and its senior consultant Laith Marouf. His hateful, bigoted and antisemitic comments, are, as I’ve said before, beyond the pale. https://t.co/otnItxTE9T

Marouf is listed as a senior consultant on the website of the CMAC, which received more than $133,000 in grants from the Department of Canadian Heritage in 2021 to build an anti-racism strategy for Canadian media. The program was launched this past April.

However, he was found to have a history of making antisemitic comments on social media such as ones referring to “Jewish White Supremacists.” While his account has been suspended, screenshots shared by journalist Jonathan Kay show dozens of such comments with Marouf’s name and photo, some of which date back to November 2018.

In an Aug. 10, 2022, tweet, Marouf said “You know all those loud mouthed bags of human feces, aka the Jewish White Supremacists; when we liberate Palestine and they have to go back to where they came from, they will return to being low voiced [expletive] of their Christian/Secular White Supremacist Masters.”

Marouf also targeted the former Liberal justice minister in his tweets, calling Cotler “the most vocal Jewish White Supremacist in the country.” In November 2021, Cotler was appointed by Prime Minister Justin Trudeau as Canada’s special envoy on preserving Holocaust remembrance and combatting antisemitism.

In a preceding comment, Marouf referred to the federal government’s National Summit on Antisemitism, held on July 21, 2021, and said it was the “brain-child” of Cotler, calling him “the Grand Wizard of Zionism in this Colony.”

In addition to the antisemitic comments, Cotler noted that Marouf has also used abusive language against members of other ethnicities.

“The Canadian Anti-Hate Network has reported that Marouf has repeatedly appeared in outlets which peddle Russian propaganda, conspiracy theories, Holocaust denial as well as antisemitic hate,” he said.

“The government and the Anti-Racism branch of Canadian Heritage have to determine how the grant was even authorized to begin with and have to put in place a vetting process to ensure that the funding of organizations, programs and individuals intended to combat racism and hate don’t end up funding organizations, programs and individuals that propagate racism and hate.”

Cotler said Marouf’s Twitter account had been suspended “for his hateful comments even before the Anti-Racism Secretariat awarded CMAC the grant.”

Federal Diversity Minister Ahmed Hussen, who oversees the diversity and inclusion program in the Heritage Department, announced on Aug. 22 that a notice has been sent to the CMAC to inform the organization that its funding has been cut and its anti-racism project has been suspended.

Hussen also demanded that the CMAC explain how it came to hire Marouf and that it provides a plan for “rectifying the situation given the nature of his antisemitic and xenophobic statements.”

In a statement issued on Aug. 21, Hussen said, “Organizations dedicated to fighting racism and discrimination must employ and partner with individuals who adhere to the values of inclusion and human decency.”

While the diversity minister said he and his team “are working to rectify this matter immediately,” calling Marouf’s comments “reprehensible and vile,” Liberal MP Anthony Housefather revealed that he had earlier warned the minister about the issue.

“I said the contract had to be cancelled. I alerted [Hussen] and I persistently communicated with the minister in his office, from the day I learned about it, until today, and aggressively demanded that action be taken,” Housefather told the National Post in an article published on Aug. 23.

“Action could have been taken more quickly.”