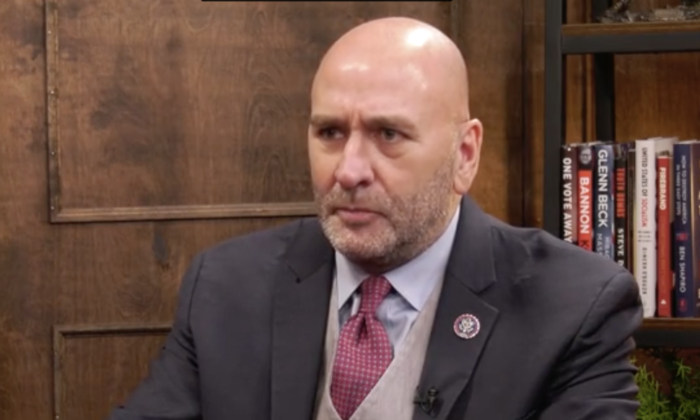 “So, we are at a turning point right now in America, where they’re going to restore law and order in our urban communities and across the country, from sea to shining sea, by reasonable and compassionate but disciplined and strong law enforcement policies, or we’re going to turn our country over to the criminals,” Higgins told NTD Capitol Report host Steve Lance in a Feb. 8 interview.

Violent crime has surged in all major cities including New York City, which for the month of January 2022, saw a 38.5 percent increase in crime compared with January 2021; Los Angeles saw an 11.8 percent increase in homicides, violent crime increased 3.9 percent and property crimes rose by 4.2 percent and the number of people shot rose by 9 percent in 2021. Chicago had 797 homicides in 2021, which was 299 more than in 2019.

Higgins said it’s liberal policies and defund the police movement that is spurring the crime wave. The number of police officers is declining due to fears about being targeted by criminals.

“When I left law enforcement to serve in Congress, we were really seeing the disturbing trend, wherein police departments and police officers would be targeted and vilified and demonized and persecuted and prosecuted for just doing their job. So, we have to turn that around in America or, or the criminals will run the street,” said Higgins.

“So, the defund the police movement has echoed through liberal cities, and the effectiveness of the police departments has served those cities is obviously going to be impacted by that tone, that persecution of a street cop just trying to do the job,” Higgins added.

Chicago Mayor Lori Lightfoot told reporters at a recent press conference that the increase in carjackings is the result of pandemic remote learning and teenagers not having supervision.

“A lot of parents went to work during the day thinking their teenagers were logged on for remote learning, only to find something else. And I ask, ‘Is there some new market for stolen cars?’ And unfortunately, the answer was no—that for many of these kids, some of whom had no prior involvement in the criminal justice system, this was pure boredom,” Lightfoot said at a recent press conference to announce a carjacking task force.

According to the Civic Federation website, vehicular hijackings in the City of Chicago increased in 2020 by 135 percent over the previous year, from 603 carjackings in 2019 to 1,416 in 2020.

“Mayor Lightfoot is reflective of a part of the problem. You know, our municipalities, our cities, are in trouble largely because of mayors like that, that don’t get it or worse, perhaps they do get it maybe they do understand and they’re purposefully hindering professional law enforcement,” said Higgins.

The Epoch Times reached out to Mayor Lightfoot’s office for comment.

The spokesperson for the National Police Association, Sgt. Betsy Brantner Smith told Newsmax on Feb. 7 that liberal law enforcement policies and anti-cop rhetoric are fueling the rise in crime.

“Since the death of George Floyd, we have had this anti-cop narrative, a false narrative that somehow American law enforcement is the danger to our communities. It’s not, what we need is to enforce the existing laws,” said Brantner-Smith.

“We need zero tolerance for street gangs, for drug pushing, for attacking police officers. We need to rein in the bail reform. We need to rein in incarceration information. We need to take on the woke, progressive prosecutors that are gaining a foothold in this country in places like New York, L.A., Chicago.”

Higgins thinks another way officers are being targeted by the left, is their push to take away qualified immunity (a rule that prevents a police officer from being sued by an offender), so they can do their jobs without worry.

“But the bottom line is that if a police officer is doing a job within the parameters of his training and department policy, then he’s protected from lawsuit minus the department itself and the legal team that comes with that,” he said.

“And we have to maintain that reasonable and lawful level of insulation from frivolous lawsuits that police officers currently have and have always had. But there’s a lot of talk about pulling that now. So, cops will just leave the job,” said Higgins while adding police officers cannot afford the legal costs of being sued so they will leave their jobs.

National Fraternal Order of Police President Patrick Yoes told Fox News’ Fox & Friends during a Feb. 2 interview that liberal cities officials need to end soft policies that allow criminals to be released back into the community after being arrested and support officers so they can do their jobs.

“We need to have some real sound solutions on a path forward to stop the revolving door to keep serious, violent offenders off the streets and to make our community safe,” said Yoes.

“We recognize that there’s a serious problem in this country, and we need to pull together and we need to get past, this is not political, it’s our officers that are out in the streets, that are putting themselves in harm’s way. They could care less about the politics, but they took this job because it’s important to them to serve their communities,” he added.

Higgins emphasized the importance of the issue.