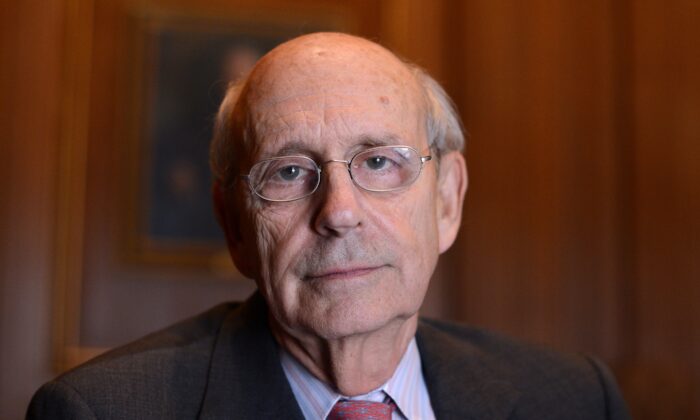 U.S. Supreme Court Justice Stephen Breyer poses during an interview with Agence France-Presse at the Supreme Court in Washington, on May 17, 2012. (Jewel Samad/AFP/Getty Images)
Judiciary

Former Supreme Court Justice Stephen Breyer said in a televised interview that he pushed his colleagues on the court to change their votes and not overturn Roe v. Wade, the seminal 1973 precedent that legalized abortion in the United States, a ruling that, in the end, they voted to reverse.

Breyer, 84, was referring to the decision in Dobbs v. Jackson Women’s Health Organization, in which the Supreme Court voted 6-3 on June 24 to uphold a Mississippi law that bans abortion after 15 weeks of pregnancy. The court also voted 5-4 to overturn Roe, returning the regulation of abortion to the states.

Days after the decision, the now-retired Breyer was replaced on the court by Justice Ketanji Brown Jackson, who was sworn in on June 30 after being confirmed by the Senate on April 7. Breyer, who was nominated by then-President Bill Clinton, was seated on the court on Aug. 3, 1994.

The comments came in an interview with Chris Wallace on “Who’s Talking to Chris Wallace,” which debuted Sept. 23 on HBOMax and was to air Sept. 25 on CNN. The comments also came as the Supreme Court prepared to begin its new term with oral arguments on Oct. 3.

“You had a bad final year. Some of the most important cases on the court—abortion, guns, the power of the EPA to regulate the climate—you were on the losing side. Was that frustrating for you to lose important case after important case?” Wallace said.

“But how frustrating?” Wallace said.

“When the court undoes a right that people have lived with for half a century, doesn’t that very much shake the authority of the court?” Wallace said.

“Of course I didn’t. Of course I didn’t. Was I happy about it? Not for an instant. Did I do everything I could to persuade people? Of course, of course. But there we are. And now we go on. And we try to work together. I mean, it’s a little corny what I think, but I do think it.”

In Dobbs, the three liberal justices—Breyer, Sonia Sotomayor, and Elena Kagan—felt strongly enough about the case that they took the unusual step of issuing a three-way joint dissent.

According to the liberal justices, the court majority’s opinion states that “from the very moment of fertilization, a woman has no rights to speak of. A state can force her to bring a pregnancy to term, even at the steepest personal and familial costs.”

In the CNN interview, Breyer also condemned the unprecedented leak of an early draft majority opinion in Dobbs. Politico published the draft document dated Feb. 10 on May 2 without disclosing its source.

While court staffers are investigating the leak, it’s unclear what they have discovered. Kagan called the leak “horrible” earlier this month; she also said an update on the probe is expected by month’s end, as The Epoch Times has reported.

Wallace asked Breyer in the interview if the leak caused “an earthquake inside the court.”

Breyer said after the leak, there was a less collegial atmosphere on the court.

“Maybe a little less jolly, but not I mean—I have not heard people in that conference room scream at each other in anger.”