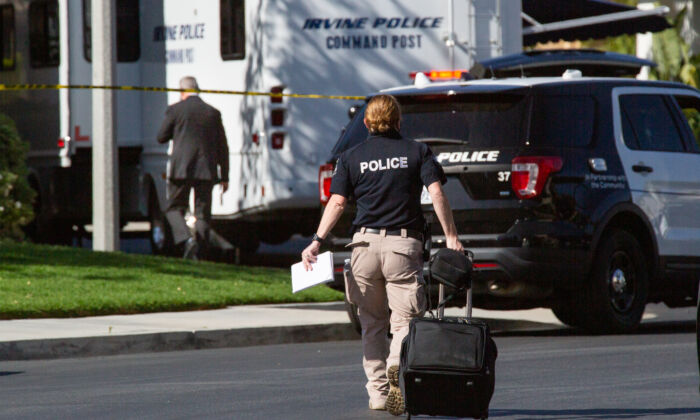 A crime scene is marked by the Irvine Police Department in Irvine, Calif., on May 5, 2021. (John Fredricks/The Epoch Times)
Southern California

SANTA ANA, Calif.—A former Irvine police officer pleaded guilty June 23 and was immediately sentenced to a year in jail for stealing about $68,000 by putting in for overtime he never worked.

Matthew Christian August, 49, of Aliso Viejo, was also placed on three years of formal probation upon pleading guilty to 34 felony counts of presenting a false claim and two felony counts of grand theft by an employee.

August is scheduled to report on Aug. 20 to serve 364 days in jail. August will be applying for home confinement.

August could have faced up to 25 years in prison if convicted at trial, according to the Orange County District Attorney’s Office.

August, who worked for the Irvine Police Department from November 2005 through Aug. 12, 2019, filed 34 time cards requesting overtime pay for hours he never worked, according to prosecutors.

In June 2018, police officials noticed discrepancies between his overtime requests and the hours he worked, and he was charged the following summer.