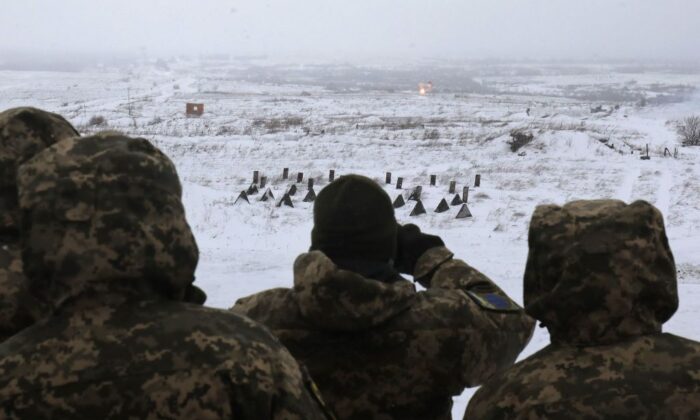 Ukrainian Military Forces servicemen attend a military drill with Next generation Light Anti-tank Weapon (NLAW) Swedish-British anti-aircraft missile launchers at the firing ground of the International Center for Peacekeeping and Security, near the western Ukrainian city of Lviv on Jan. 28, 2022. (AFP via Getty Images)
US

Grenell made his remarks at a Feb. 16 congressional hearing on Ukraine, following a recent declaration from the White House that the threat of a Russian invasion is “immediate.” Russia has repeatedly denied any invasion plans and has claimed to have started moving some of its forces away from Ukraine’s borders—although NATO officials said Feb. 16 they have no evidence of a withdrawal.

At the hearing, numerous witnesses and lawmakers called for the Biden administration to meet Russian President Vladimir Putin with force if he invades Ukraine. Rep. Kweisi Mfume (D-Md.) went so far as to compare Putin with Hitler, suggesting that he will continue to expand into Europe if not cut off now.

“I remember Hitler’s aggression and what was known as ‘war creep,’ and I can tell you what we’re seeing here is war creep,” said Mfume, prompting Andrea Kendall-Taylor, a director at the Center for a New American Security, to agree and call for a return to a “Cold War mentality” with Russia.

But Grenell, who was U.S. ambassador to Germany from 2018 to 2020 before serving briefly as acting director of national intelligence at the end of the Trump administration, criticized these sentiments as needlessly disregardful of diplomacy.

“I think the United States is being aggressively alarmist right now,” he said. “We’ve shoved aside diplomacy; there’s all sorts of talk of war. We’ve rejected the tools the United States has in terms of sanctions.”

Grenell touted the U.S. government’s 2019 imposition of sanctions against any firm that helped Russia finish an undersea gas pipeline to Germany. Biden lifted those sanctions soon after taking office.

“To have all of official Washington racing towards military options, ignoring the diplomatic tool that will cripple Putin [sanctions on Nord Stream 2]—it’s typical of Washington, D.C.—all of the pundits in Washington racing to talk about war instead of utilizing diplomacy,” Grenell said.

He further raised doubts about the White House’s claims of an impending Russian invasion of Ukraine. He said that if such claims were true, he couldn’t imagine why the White House was sitting by as Nord Stream 2 proceeds.

“The aggressive talk coming out of Washington is not verified intel,” he said. “If verifiable intel really showed a bloody war coming around the corner, I can’t think of anything more callous than waiting for bloodshed to be shown on television before we would make a move on diplomacy and do Nord Stream 2 sanctions.”

Sen. Ted Cruz (R-Texas) introduced a Nord Stream 2 sanctions bill last month, but it was defeated. Sen. Rand Paul (R-Ky.) was the lone Republican to oppose the legislation, criticizing the policy as damaging to German allies and a handout for U.S. oil companies.

“Opponents of the pipeline, not surprisingly, are largely from states that compete in the sale of natural gas. Reports are that the pipeline will cause a significant reduction in U.S. exports of liquid natural gas,” Paul said in a Jan. 13 floor speech.

In his speech, Paul also made a similar point as Grenell, saying that the Nord Stream 2 sanctions could be used as a tool to deter Russian aggression toward Ukraine.

“If Nord Stream 2 sanctions were really about changing Russian policy or deterring aggression, then NATO, including Germany, could threaten sanctions if Russia invades Ukraine,” he said. “Now, that threat of sanctions, with Germany as an ally, might actually have deterring value.”