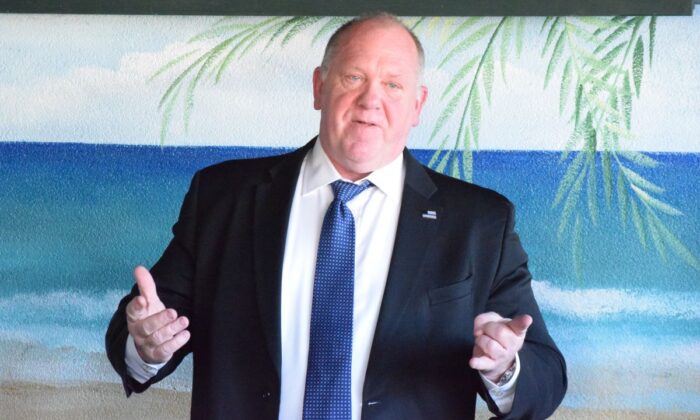 Former ICE Head: Throngs of Illegal Immigrants Allowed in US for Political Power

'This is about political power in the future'
By Beth Brelje

WEST HAMBURG, Pa.—Despite a historically high number of people coming across the United States border in 2021, Immigration and Customs Enforcement (ICE) had a historically low number of arrests and removals.

“That’s on purpose,” according to Thomas Homan, former acting director of ICE under President Donald Trump. Homan worked under six presidents but says this one is different.

“President Biden is the first president in the history of this nation who came into office and intentionally unsecured the border,” he said during a conversation on Jan. 20 in Pennsylvania, about the local effects of unchecked immigration beyond border towns.

The event, attended by about eight Pennsylvania county sheriffs and some state and local lawmakers, was hosted by Berks County Sheriff Eric Weaknecht, the Patriot Caucus, and Berks County Patriots, a well-established Republican club that typically draws several hundred people to its monthly meetings. Homan also spoke at a meeting of the Berks County Patriots later that night.

“Under President Trump, immigration was down 83 percent. We were at a 40 year low for immigration,” Homan said.

He called Trump the greatest president he ever worked for, and said accusations that his border policies were inhumane are absurd because encouraging immigrants to enter the U.S. illegally leads to ugly human rights crimes.

Homan said 31 percent of the women who make the journey to the United States are sexually assaulted, while children die and criminal cartels make billions of dollars.

“When illegal immigration is down by 83 percent, how many women aren’t being raped? How many pounds of fentanyl are not coming across the border?” he said.

Yet the Biden administration has taken steps that attract more people to enter illegally, and at the same time, “decapitated ICE,” by ending the Remain in Mexico plan and weakening enforcement.

“Being in the country illegally is no longer enough of a reason to be arrested and deported. They have to be convicted of an aggravated felony,” Homan said. “If you’re an MS-13 gang member and you get arrested in New York City today for raping an 8-year-old child, if you’re able to post bond, ICE can’t touch you. Even though you are illegally in the United States, even though you’ve been arrested for raping a child, even though you may have a final order from immigration saying you must leave the country, ICE can’t touch you.”

What is the motivation for lax immigration enforcement?

“They want these people to stay,” Homan said. “Why? Biden overturned Trump’s objection to counting illegal immigrants in the census. Millions of new people will be counted in the next census in sanctuary cities, which will result in more seats in the House for the Democrats, which leaves your electoral college in their perpetual power. There’s no other reason. … This is about political power in the future.”

Even if the border wall were completed, we would still have immigration, Homan said. The wall was never expected to fully stop illegal immigration. It was to slow it and to encourage more legal entrance.

He said people outside of border towns should be concerned “because 97 percent of people who cross the southwest border don’t stay in Arizona and Texas—they go all throughout the country.”

“Sex trafficking of women and children is at an all-time high right now because the border is unprotected, so trafficking organizations work with the criminal cartels. That is happening not only at the southern border, but in this community, too,” Homan said.

He noted that people with the intention to commit terrorist acts can more easily walk through the southern border than fly in.

Planes full of unaccompanied minors seen landing in airports and dropping children off at waiting buses headed to unspecified destinations often have been part of a criminal enterprise, he said.

“They say they release them to a sponsor or relatives, but about 75 percent of the unaccompanied minors are released to parents who are here illegally,” Homan said. “Parents up here contact a criminal organization and say they want their child up here. They pay $9,000 to 10,000 to smuggle them to the border.”

Then the Biden administration gives them a plane ticket. “You, the taxpayer, are going to deliver them to the very people who conspired to smuggle them here, which is a felony,” he said.

Some children go to nonprofit organizations receiving government funding, which reunite children with their parents, also in the United States illegally.

When Homan led ICE, DNA tests were conducted to help determine whether children were traveling with their parents or were being trafficked. The Biden administration is focused on quickly releasing people from border-holding areas, so border officials don’t have time for things like DNA tests. Quickly moving people into the country also means no more problematic public relations photos like the squalid conditions seen in September showing Haitian immigrants under a Texas bridge.

Homan said that if Trump comes back and wants him on the team, he will come back.

“I’ve already got a list of who I’m going fire,” he said. “We’re going to fix it. But will we be able to repair all the damage that’s been done? No. There are too many people here illegally who will never leave.”