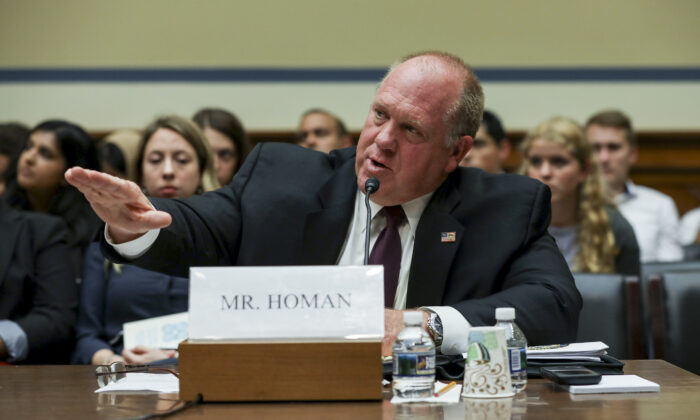 “It’s another enticement. It’s another way of minimizing illegality of illegal immigration; making them comfortable, giving them benefits,” Homan said. “There’s absolutely no reason to give a privilege of a driver’s license to someone who is here in violation of the law.”

The Driver’s License Access and Privacy Act, also known as the “Green Light Law,” also withholds all Department of Motor Vehicles (DMV) records and information from agencies “that primarily enforce immigration law.” It came into effect on Dec. 16.

Homan said the new law is in direct defiance of 8 U.S. Code 1373, which states, in part, “[A] Federal, State, or local government entity or official may not prohibit, or in any way restrict, any government entity or official from sending to, or receiving from, the Immigration and Naturalization Service information regarding the citizenship or immigration status, lawful or unlawful, of any individual.”

The Department of Homeland Security issued a statement saying that immigration authorities use such records to help investigate crimes such as “child exploitation, human trafficking, terrorism, the targeting of gang members, sex offenders, and drug smuggling.”

“Accessing this information is vital to building out these criminal cases, identifying criminal suspects, and enhancing officer safety,” the spokesperson for Homeland Security wrote on Twitter Dec. 17.

New York City Mayor Bill de Blasio argued in a tweet on Dec. 16 that “it makes EVERYONE safer when every driver on our roads has a license.”

Proponents say that roads will be safer if illegal immigrants take the required written and road tests before getting a license, as well as get insured. However, illegal aliens who drive without a license might not apply for a license, or those who fail the test may not stop driving.

Twenty-seven county clerks with DMV responsibilities in New York issued a press release on Dec. 13, saying the affidavit will enable people to conceal their true identities.

“State DMV representatives admitted during their conference call with county clerks on Monday, Dec. 9, that they have no way to check or verify if a person using the affidavit form in fact was never issued a Social Security number,” the statement said.

The county clerks said the law will create “unacceptable security risks as the loopholes allow for nefarious people to obtain a … driver license and use it to commit bank fraud, identity theft, credit card fraud, human trafficking, and other criminal activities.”

Approximately 265,000 illegal immigrants in New York will be eligible for driver’s licenses without verification of Social Security numbers, according to an estimate by Rep. Lee Zeldin (R-N.Y.), who wrote to the Justice Department requesting a review of the legality of the law.

The Department of Justice didn’t respond to a request for comment on any action it may take against New York. The Green Light Law has survived two state legal challenges.

Homan said giving out driver’s licenses to illegal aliens doesn’t make sense. “Most of them have been ordered removed by a federal judge, so they’re fugitives,” Homan said. “I don’t get it.”

The DMV has a voter enrolment checkbox on the form, and, if the applicant checks the box, they are enrolled to vote. Although only citizens are eligible to vote, citizenship is not verified at the DMV and photo identification is not required at voting booths in New York.

The New York DMV said the licenses issued to illegal aliens won’t comply with the federal REAL ID Act and will have “NOT FOR FEDERAL PURPOSES” written in small letters on them. This means, after Oct. 1, 2020, when the REAL ID Act kicks in, the license cannot be used to board a domestic flight or enter some secure federal buildings.

New York is one of 13 states to allow illegal aliens to possess driver’s licenses. New Jersey passed a law on Dec. 16.

Other states that allow illegal immigrants to get a driver’s license include California, Colorado, Connecticut, Delaware, Hawaii, Illinois, Maryland, New Mexico, Nevada, Vermont, Washington, and the District of Columbia.

By April 2018, California had issued more than 1 million driver’s licenses to illegal immigrants in the state.