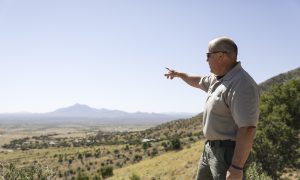 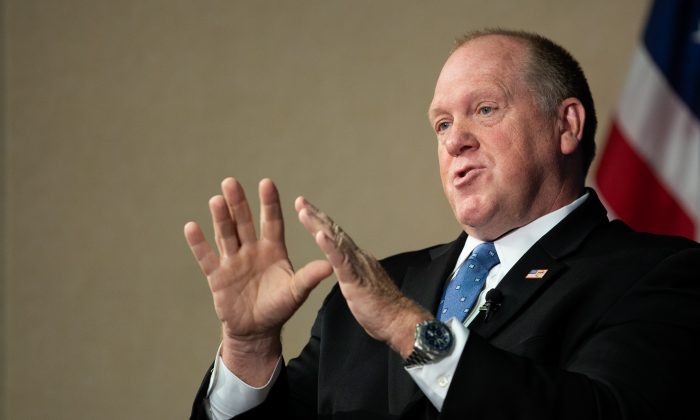 In an interview with “Fox and Friends,” Trump said Homan will be focused on the southern border as the United States deals with a rising influx of illegal immigrants, most of whom are traveling through Mexico from Central America.

Trump did not elaborate on the official position Homan will serve, but said he’d report directly to the president. Border czar is more of an informal job description.

“Tom Homan’s coming back, I would say that would be announced next week except I’d rather announce it now,” Trump told the network. “He’s going to be very much involved with the border. That’s what he really wants to be involved with.”

The president said Homan will “probably be working out of the White House but also spending a lot of time at the border.” He described Homan as a “good man” who had served his previous role well.

Trump asked Homan to head up ICE in January 2017—former Homeland Security Secretary John Kelly called Homan as the latter was leaving his retirement function. Homan left ICE in June 2018, but has stayed very much engaged in border issues.

In late May, Homan said he traveled to Phoenix and Tucson to talk to “some old Border Patrol friends of mine, chiefs, and just catch up on what they think’s going on.”

“I’ve also talked to the chief from San Diego, chief from Texas. I’m just trying to get the latest that, you know, they are inundated,” he told The Epoch Times on May 24.

Border Patrol has apprehended almost 600,000 illegal aliens on the southern border this fiscal year, according to the latest Customs and Border Protection (CBP) data.

The influx of illegal immigrants has put a heavy strain on the agency. Border officials told The Epoch Times previously that migrant families in Texas were being transported to other sectors along the southern border by plane and bus, because of capacity limitations. The Department of Defense is building temporary facilities for CBP to house more illegal immigrants.

“It’s just really unfortunate that four out of 10 Border Patrol agents are off the line and taking care of these populations and transportation and doing a lot of work from the background, not really patrolling the line—which again, as I’ve said many times—the less people on the line, the more porous our border is and the more the criminal cartels are going to take advantage of it,” Homan said. “So this humanitarian crisis everybody keeps talking about is actually creating a national security crisis on our border.”

Using the threat of tariffs, Trump said he has reached a deal with Mexico that is meant to stem the tide. Mexican President Andres Manuel Lopez Obrador said he will reveal the details of the plan on June 14.

Mexico’s own southern border has been essentially wide open, but Mexico said it will send 6,000 of its national guard troops down to close it off. As of June 13, no troops were seen, according to locals reporting to The Epoch Times.

It is likely the deal will also include an expansion of the Remain in Mexico policy that would require asylum-seekers to stay in Mexico while their case is adjudicated in the United States.

About two miles of border wall is being built per week right now, according to Acting Homeland Security Secretary Kevin McAleenan.

“[It’s] coming along aggressively,” he told  Trump during a meeting at the White House on June 12. “By the end of next year, over 400 miles [will be built].”

Trump predicted it might be closer to 500 miles, and said, “We have to kick and scream for every inch because the Democrats just will not give us what we need.”

New and replacement wall is currently being constructed near San Diego, as well as San Luis, Arizona, and El Paso and the Rio Grande Valley in Texas, according to Customs and Border Protection (CBP).

Ground excavation is underway in Otay Mesa in the San Diego Sector, CBP said on June 11. The 14 miles of new wall will act as a secondary barrier. It will be 30 feet high and “will be outfitted with smart detection technology that keeps Border Patrol agents safe while deterring illicit cross-border activity,” CBP wrote on Twitter.

In San Luis, Arizona, around 22 miles of primary fencing is being constructed, with about 1 mile completed by May 30, according to CBP.

A total of 44 miles of steel bollard pedestrian barrier is to replace ineffective fencing in the Yuma, El Centro, and San Diego sectors.