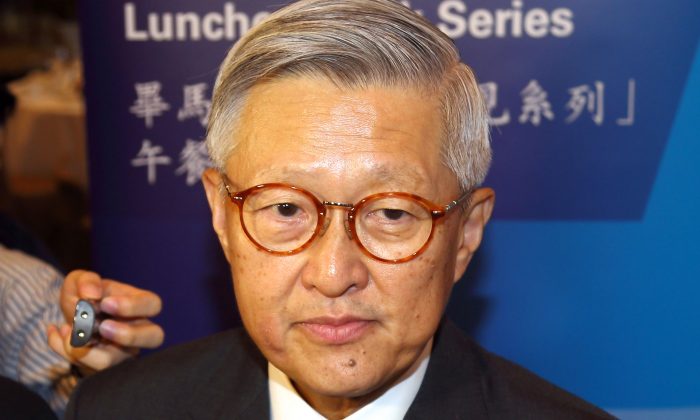 Retired Hong Kong chief justice Andrew Li meets the press on Nov. 13, 2013 in Hong Kong. During prepared remarks given at a luncheon, Li discussed the importance of the National People's Congress not interfering with judicial decisions made in Hong Kong. (Epoch Times)
China

Retired Hong Kong chief justice Andrew Li has talked openly for the first time about his opinion that the Chinese Communist Party (CCP) should not override Hong Kong court decisions.

Li gave a 20-minute speech on the importance of the rule of law during a Nov. 13 luncheon hosted by major accounting firm KPMG. He said that under Hong Kong’s Basic Law, the National People’s Congress (NPC) in China has the power to interpret Hong Kong court rulings, but interpretation should only be applied under very special circumstances.

When the Court of Hong Kong has already reached a verdict, Li said, the NPC should not give an interpretation because this has a negative effect on Hong Kong’s judicial independence. It could damage the rule of law in Hong Kong, he said.

He emphasized that the rule of law is the core value of Hong Kong. It is the opposite of autocratic government, setting Hong Kong apart from the system in mainland China.

After the CCP took over Hong Kong, Li served as Chief Justice at the Court of Final Appeal for 13 years. He has earned much praise for upholding human rights and the rule of law in Hong Kong.

In 1999 Li passed a verdict on the case of the right of abode, and it was overruled by the interpretation of the NPC. Until now, he had never commented on it before.

“Reflecting after some 14 years, I believe that the right of abode controversy provided a salutary experience in the formative years of the new order,” Li said in his speech according to The Standard.

“The rule of law with an independent judiciary has remained an unshakable foundation of our society,” Li added. “Judges cannot protect it alone. Eternal vigilance is the price of liberty.”

Li said he thinks that Hong Kong’s judicial independence and rule of law are still very sound for now, but the society must remain vigilant. He added that the rule of law must be respected by society and supported by independent media, and independent legal professionals and law schools must do their best.

Li also mentioned that while large and wealthy organizations in Hong Kong can afford the cost of litigation, and those with low income can apply for legal aid, there are still some including small and medium enterprises (SMEs) who cannot afford legal costs. He proposed to simplify procedures to enable more people to solve problems through judicial means.

Instead of leaving right away, Li stayed on for almost 20 minutes to answer questions from reporters, including about the recent heated controversy over the Hong Kong government’s refusal to grant a license to Hong Kong Television Network (HKTV).

Li said judicial reviews must comply with conditions, and the court’s guideline is that there must be a reasonable argument for judicial review. He added that the Court is not a place to solve complex issues such as political, economic, and social issues; instead, these things should be addressed in the political arena.

When asked about the planned Occupy Central movement for universal suffrage, Li answered that after 1997, the most effective demonstration in Hong Kong was the 2003 march against Article 23. He said this event did not break the law at all, according to The Standard.

Therefore, he said that demonstrating using lawful means can be very effective, so there is no need to deliberately use illegal methods.