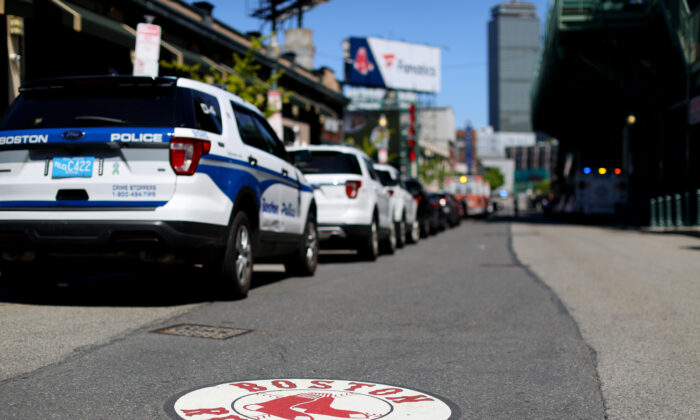 Police cars in Boston, on May 20, 2020. (Maddie Meyer/Getty Images)
Crime and Incidents

A former dean of a high school in Boston has been ordered by a federal judge to pay over $10 million in damages to a former student he attempted to murder over a drug sale dispute.

Shaun Harrison, the former dean of English High School, was convicted of assault and other charges in a state court in 2018. He was also sentenced to 26 years in prison. The judgment was taken after it came to light that Harrison used his position to recruit students to sell drugs. In March 2015, Harrison shot a 17-year-old boy, Luis Rodriguez, due to a drug sale dispute that left the boy with medical complications.

The victim filed a civil lawsuit against the former dean in 2019. On Aug. 5, a federal judge ordered Harrison to pay the boy $2.5 million in punitive damages, $7.5 million in damages for suffering, emotional distress, and pain, and over $80,000 for covering the victim’s medical bills.

Rodriguez has undergone two surgeries and continues to be in pain owing to the bullet still lodged in his head. Because of the pain, he ended up developing an addiction to prescription opioids.

Rodriguez suffers from hearing loss, facial neuropathy, and half of his face remains paralyzed. He needs to have weights on his eyelids in order to open and close his eyes.

“He’s rebounding from addiction to opiates,” Rodriguez’s lawyer, John T. Martin, told The Boston Globe. “He’s very involved with his community and his family and is doing therapeutic things. He’s striving and thriving and working his way back into getting a job.”

Harrison had arrived at English High in January 2015, just two months before shooting Rodriguez. During the previous five years, he had worked at multiple city public schools.

For several decades, Harrison worked as a youth minister and community organizer in Boston and also collaborated with law enforcement. At English High, he was called “Rev” by students because of his pastor-like demeanor.

However, behind the public façade, Harrison boasted to students about his gang ties, guns, and drugs.

An investigation following Harrison’s arrest in March 2015 revealed that he had been reprimanded several times in his previous stints in the public school system. He was accused of having made inappropriate comments to two students in 2012, and pushing a female student.

“You professed to be a man of religion, you promote yourself as one who can mentor troubled youth … and yet you violated their safety by bringing drugs and violence to them,” Judge Christopher Muse said during Harrison’s court trial in 2018.

Speaking to The Associated Press, Martin said that Friday’s judgment will ensure that Harrison is “never able to profit from any endeavors” once he is released from prison, including selling the rights to his story for publication.

Martin also blamed Boston Public Schools for being “absolutely dismissive” about student safety and being “grossly negligent” in allowing a “predator” to have authority.

The lawsuit also named Boston Public Schools as a defendant, but the judge dismissed claims against the school district. Martin is appealing this ruling.

As Harrison is imprisoned, it is unclear how Rodriguez will receive the $10 million compensation.