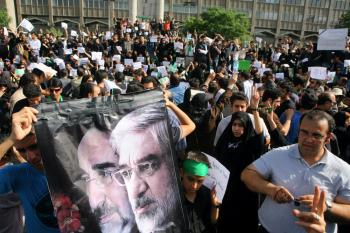 Dor Levinter
View profile
Follow
biggersmaller
Print
JERUSALEM—Former head of Israeli intelligence agency Mossad, Efraim Halevy, sees different possible scenarios of what he calls the ongoing revolution in Iran. He addressed the current situation in Iran during an assembly to mark 80 years for the Jewish agency which was held in the Inbal hotel in Jerusalem on Sunday.

Efraim Halevy was head of the Mossad and the Israeli National Security Council. He is an expert on Iranian issues. Currently, he is the head of the center for strategical studies at the Hebrew University in Jerusalem.

Halevy, disagreeing with other experts, believes that the current clash in Iran is undoubtedly a genuine revolution lead by Mir Hossein Mousavi, the reformist presidential candidate who lost the elections. The questions, he says, is what the results would be.

Halevy said that things are difficult to predict since everything that has transpired in Iran has been unexpected. Resistance to the regime from within the system is something that was unexpected.

“On June 20, Mousavi said that the elections results were predetermined,” said Halevy.

“He should know, because he himself was elected to in a similar way to be prime minister—a role that did not exist beforehand—because he was so connected with the current leadership. Mousavi is now taking a role that he had never taken before—to resist the system from within.”

Despite that, Halevy said that the Haminai-led Iranian regime does not necessarily want to get rid of Mousavi. “There is no revolution without a leader,” said Halevy.

“Therefore, Mousavi's survival is a key question. If he disappears, maybe another even worse leader will replace him.” On the other hand, Mousavi's “disappearance” might bring an end to the demonstrations and protests, said Halevy.

“Since Mousavi doesn't act according to his own nature, nobody can predict what he will do in the future, and whether he succeeds in the revolution or not,”said Halevy.

Halevy claims that if the revolution fails, eventually, the Revolutionary Guards will grow stronger and will control more things and be involved in everything in Iran.

“If the revolution fails, the Revolutionary Guards might think: 'what do we needs the Islamic clergy for?' their appetite might grow larger,” he said.

Halevy expects a period of instability in Iran whether the revolution succeeds or not, and he fears that hostility towards Israel among the Iranian elite will grow, because “like always, Israel is to be blamed for everything.”

Although many call for the international community to intervene, to help the revolutionaries and to denounce the violence, Halevy suggests that Israel should not intervene in order to maintain stability with the neighboring countries.