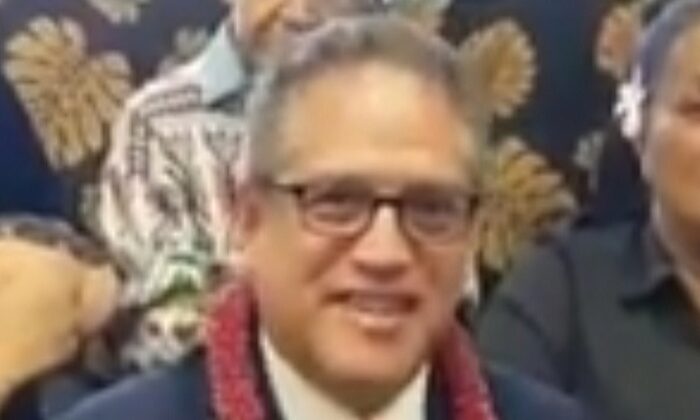 Former Hawaii Senate Majority Leader J. Kalani English, a Democrat, was given a 40-month prison term and a $100,000 fine by a federal judge on July 5 after pleading guilty to honest-services wire fraud five months ago.

English admitted that he took bribes from a business owner in exchange for promoting wastewater legislation that would help a company involved in government-financed cesspool conversion projects, according to an Associated Press report.

Prosecutors said in court documents that the former lawmaker “peddled the power and influence of his position as a Hawaii State Senator and Majority Leader to enrich himself and betray the trust bestowed upon him by those he was elected to serve.”

English was a Maui County councilman before he was elected to the Hawaii Legislature. In 2014, he became the majority leader in the state Senate.

English was arrested in early 2020 after the FBI had been investigating him for years. The FBI reported that he took upward of $18,000 in cash and other gifts—including restaurant meals and hotel rooms in Las Vegas—in exchange for supporting the wastewater legislation, according to Honolulu Civil Beat.

“What you have done here is so serious, so detrimental to the fabric of society, that surely a serious sentence is warranted,” Mollway said.

Assistant U.S. Attorney Kenneth Sorenson reportedly said the sentence “sends the message that those who peddle their elected offices for their own financial gain and greed will be sentenced severely.”

The court judgment signed by Mollway states that English is to report to prison on Aug. 16. After the prison term is complete, he’s subject to three years of supervised release.

Federal law makes it a crime to engage in honest-services fraud, which it defines as “a scheme or artifice to deprive another of the intangible right of honest services.” For honest-services fraud to take place, someone must pay a bribe and someone else must be harmed by it. The thinking behind the law is that the person accepting the bribe owes a duty to someone else, such as the citizenry.

The Supreme Court agreed on June 30 to review the corruption convictions of Joe Percoco, a longtime aide to former New York Gov. Andrew Cuomo, a Democrat, in a case that may call into question the lawfulness of honest-services fraud prosecutions.