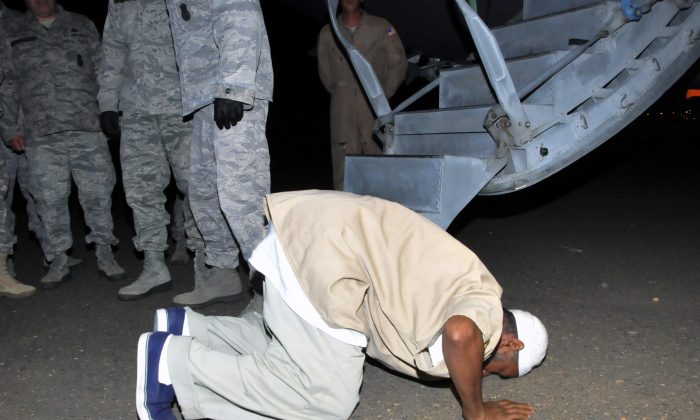 Sudanese national, Ibrahim al-Qosi, in his 50s, a former al-Qaida cook released from Guantanamo, prays upon arrival at Khartoum airport in Khartoum, Sudan, Wednesday, July 11, 2012. Al-Qosi arrived before dawn on a US Air Force aircraft after his release from 10 years in detention. (AP Photo/Abd Raouf)
Middle East

A former Guantanamo Bay detainee has resurfaced in Yemen in a new video released by Al Qaeda.

Ibrahim Qosi, who is also known as Sheikh Khubayb al Sudani, pled guilty to charges of conspiracy and material support for terrorism before a military commission in July 2010, and agreed to cooperate with the United States in exchange for serving a shorter sentence.

Qosi was convicted of the charges stemming from his work as a bodyguard and driver for Osama bin Laden in the ’90s until after the Sept. 11 terrorist attacks on New York, although he only admitted to being a cook.

While questioned at Guantanamo, he was asked why he stayed true to bin Laden for so many years. Qosi said it was his “religious duty to defend Islam and fulfill the obligation of jihad and that the war between America and al Qaeda is a war between Islam and aggression of the infidels.”

Al Qaeda has released a new video featuring a former Gitmo detainee who was transferred to Sudan in 2012. Allen West said this alarming discovery is a stark reminder of the Obama administration’s decision to trade the Taliban Five for Bowe Bergdahl. helhttp://fxn.ws/1SQ7HCP

As part of his agreement, Qosi was transferred to his home country of Sudan in July 2012 as a free man. His views haven’t changed, according to a new video.

Qosi joined Al Qaeda in the Arabian Peninsula in 2014, reported the Long War Journal, and soon became one of its leaders.

Qosi and other AQAP commanders in the new video, titled “Guardians of Sharia,” discuss their time waging jihad.

The militants discuss how Al Qaeda encourages attacks from abroad, specifically celebrating jihadists who have carried out attacks such as the Kouachi brothers, who attacked the Charlie Hebo offices in Paris earlier this year.

“Qosi’s appearance marks the first time he has starred in jihadist propaganda since he left Guantanamo. His personal relationship with Osama bin Laden and time in American detention make him an especially high-profile spokesman,” the Journal reported.