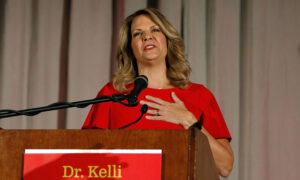 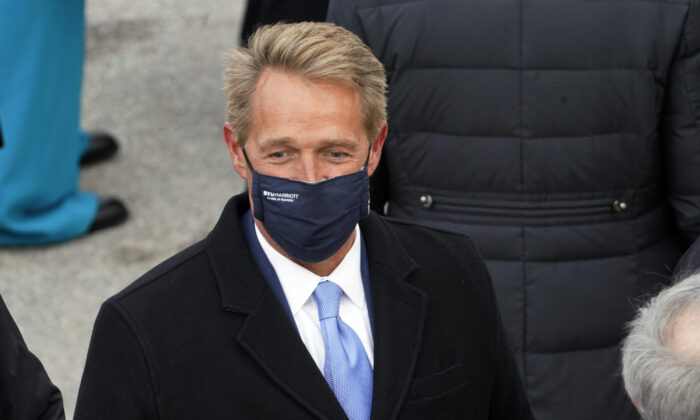 A former Republican senator said he’s been in touch with the Biden administration regarding bipartisanship in foreign policy positions, but indicates there’s been “no specific talks” about ambassadorships.

“All I’ve said is I have an interest in making sure President Biden’s foreign policy is bipartisan. We used to say that partisanship stops at the water’s edge,” former Sen. Jeff Flake (R-Ariz.), a CNN political commentator, said during an appearance on the network on Feb. 14.

Pressed on what he meant by “no specific talks,” Flake said: “I think they’re a ways from decisions like they’re talking about now, I mean they still have half the Cabinet to get through the Senate. But I certainly have an interest in, like I said, making sure that our foreign policy is bipartisan. But we’ll leave that to the Biden administration to make those decisions.”

Flake then confirmed that he’s been in touch with the Biden administration.

Flake, 58, left office in January 2019, after deciding not to seek reelection in the 2018 midterms. He was succeeded by Sen. Kyrsten Sinema (D-Ariz.), who defeated Republican candidate Martha McSally.

Flake has been heavily critical of former President Donald Trump and endorsed Biden over Trump in the 2020 election.

Biden trumpeted his own experience reaching across the aisle during his decades in Congress and as vice president while campaigning; he’s said he’d consider appointing Republicans to key positions.

Former Sen. Doug Jones (D-Ala.), who lost his bid for reelection last year, said Biden “will be looking at some of his Republican colleagues and others for different places in the administration.”

“We don’t see that in the Cabinet right now, but I think he’s open to that,” Jones said, while appearing on the same program.

Biden has seen some of his nominations stall because the Senate was consumed with the impeachment trial of Trump. The Senate acquitted Trump on Feb. 13, enabling Congress to turn to other matters.

Biden has so far picked no Republicans for key posts.

One report last week claimed that Biden was considering nominating Flake and Cindy McCain, the widow of the late Sen. John McCain (R-Ariz.) and a fellow Republican from Arizona, for ambassadorships. McCain also endorsed Biden in 2020, and has criticized Trump.

Flake, McCain, and Arizona GOP Gov. Doug Ducey were censured last month by the Arizona Republican Party for their opposition to Trump.

Flake penned an op-ed for CNN on Feb. 15 that called for the Republican Party to move on from the former president.

“There is no redeeming his behavior. And let’s not continue this tragic charade by further humiliating and debasing ourselves,” he wrote, referring to allegations against Trump relating to the Jan. 6 breach of the U.S. Capitol.

“History always knows the truth. Let’s learn the lessons of this experience, admit our failings, and move on. This is what our country deserves.”