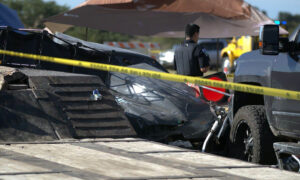 A Google employee who was fired after complaining of sexual harassment has filed a lawsuit.

Britt Storkson, 63, worked at a Google data center in The Dalles, Oregon. He said he was subject to an environment of sexual harassment, and wants $400,000 in damages.

Storkson said he has been in the workforce for over 40 years.

“I’ve never seen this happen,” he said, about his experiences at Google.

Storkson was fired in June, after Google completed an investigation into his sexual harassment claims. He says that human resources personnel told him that his claims were false because the man he alleges sexually harassed him is not gay.

“We went in to the meeting room. He turned toward me, unzipped his pants and I registered a shocked look. He put himself back together and went on with the meeting,” said Storkson, of his former supervisor.

Storkson, 63, worked at the data center for four years. He said the supervisor’s actions were a way of gauging sexual interest. Storkson also said colleagues pulled out a sex toy at work, and some regularly had sexually explicit conversations at work.

He didn’t report it at first, out of fear.

“I felt I was going to be fired the moment I reported such an incident and I thought it was better to take whatever was happening and keep my job as opposed to report it.”

Storkson began to panic after his supervisor started giving him low work performance reviews while continuing to sexually harass him. Storkson had an attorney draft a complaint letter requesting an investigation, sent to Google in April.

“Less than 24 hours after the internal investigation was over, I was terminated,” said Storkson.

Storkson and his lawyer aren’t adamant about a monetary award.

“We’d drop the complaint, honestly, and I would waive my attorney’s fees if Google would just give him his job back and implement policies so this doesn’t happen again,” said Attorney Michael Fuller.

Storkson said he filed the lawsuit to help others who may be going through the same thing. The data center employs about 100 people, and is located near Portland, Oregon.

“Maybe all this harassment is happening to other people, not just to me. You never know because people are afraid to report it for fear of being disciplined or worse,” Storkson said, via USA Today. “I’d like my job back. I liked what I did and where I worked.”

Storkson said the issue is embedded in the organization.

“I believe it’s just a culture that tolerates that sort of thing.”

Google is also facing two lawsuits from female employees, according to The Guardian. One of the lawsuits alleges Google gives lower pay to female workers, another alleges that Google’s company culture made possible the daily sexual harassment a particular female employee faced. Both lawsuits were accepted in California courts.

In the second case, Loretta Lee, who worked at Google from 2008 to 2016 as a software engineer, alleges she experienced “lewd comments, pranks and even physical violence” daily. The lawsuit also claims she was wrongfully fired.