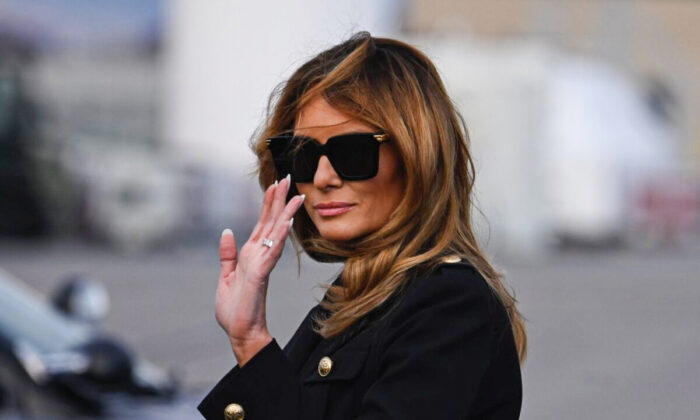 Former First Lady Melania Trump said Thursday that she was not aware of the events taking place during the U.S. Capitol breach on Jan. 6, 2021.

“On January 6, 2021, I was fulfilling one of my duties as First Lady of the United States of America, and accordingly, I was unaware of what was simultaneously transpiring at the U.S. Capitol Building,” Trump told Fox News.

She added that “it was my obligation to record the contents of the White House’s historic rooms, including taking archival photographs of all the renovations.”

“Several months in advance, I organized a qualified team of photographers, archivists, and designers to work with me in the White House to ensure perfect execution,” she continued. “As required, we scheduled January 6, 2021, to complete the work on behalf of our Nation.”

Trump also cast doubt on claims made by her former press secretary, Stephanie Grisham, who has often criticized former President Donald Trump and the former first lady after they left office.

“Ms. Grisham was not in the White House on January 6, and her behavior in her role as Chief of Staff ultimately amounts to dereliction of duty,” Trump said, while adding that normally, the first lady’s chief of staff “provides detailed briefings surrounding our Nation’s important issues.”

“In fact, Ms. Grisham failed to provide insight and information into the events surrounding January 6 as she had abandoned her post in Washington, D.C.,” she said. “Shamefully, this behavior has only partially become public knowledge; yet was consistent for Ms. Grisham.”

Trump added: “It is evident that Grisham’s recent betrayals are a last-ditch attempt to resuscitate her ruined career and reputation.”

Grisham responded to Trump’s statement Thursday with a cryptic Twitter message that read: “Lol. That’s truly all I’ve got.” The Epoch Times has contacted her for comment.

Last month, she posted on Twitter a screenshot of a conversation she allegedly had with Trump on Jan. 6.

“Do you want to tweet that peaceful protests are the right of every American, but there is no place for lawlessness & violence?” Grisham allegedly texted Trump, who was listed as “MT,” with the response in the conversation being simply “No.”

The screenshot text message that was posted by Grisham, who also served as the White House press secretary, has not been confirmed by Trump or an official source.

Grisham also issued a response Thursday amid speculation she doctored the screenshot, writing: “I’m actually not smart enough to do that.”

Adding to Fox News, Trump said that if she was “fully informed of all the details … I would have immediately denounced the violence that occurred at the Capitol Building.”

“And while Ms. Grisham’s behavior is disappointing, it is not surprising or an isolated incident,” she continued.

Her statement comes as the House committee investigating the Jan. 6 incident is continuing to hold public hearings on the Jan. 6 breach. Some Republicans and former President Trump say the panel is an attempt to distract Americans from more pressing issues such as the economy, inflation, gas prices, and illegal immigration.

On Wednesday, Attorney General Merrick Garland weighed in the Jan. 6 hearing, saying that “no person is above the law.” That comment came in response to a question about a memo the Justice Department reportedly sent out noting a longstanding agency practice of not making politically contentious prosecutions in the lead-up to federal elections.

“I can’t say it any more clearly than that. There is nothing in the principles of prosecution, in any other factors, which prevent us from investigating anyone who is criminally responsible for an attempt to undo a democratic election,” Garland told reporters at the Department of Justice headquarters in Washington.