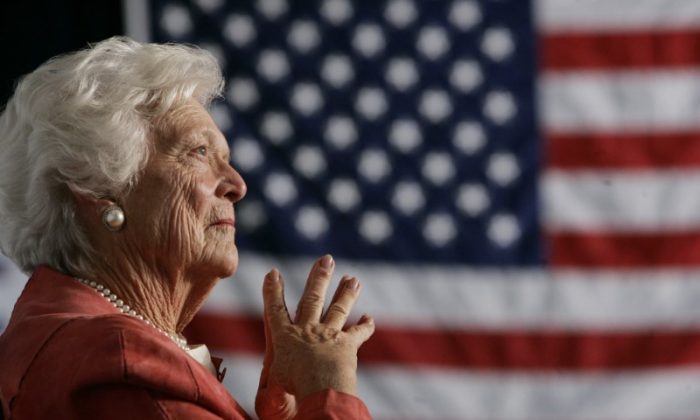 Former U.S. first lady Barbara Bush, the only woman to see her husband and son sworn in as U.S. president, passed away on Tuesday, April 17, at the age of 92, the Bush family said.

“A former First lady of the United States of America and relentless proponent of family literacy Barbara Pierce Bush passed away,” the statement said.

Statement by the Office of @GeorgeHWBush on the passing of Barbara Pierce Bush this evening at the age of 92. pic.twitter.com/c6JU0xy6Vc

Two days prior, McGrath released another statement about the former first lady which said she had made the decision, after consulting with her family and friends, to not seek additional medical treatment and instead planned to focus on comfort care.

Statement by the Office of George H. W. Bush on the health of former First Lady Barbara Bush. pic.twitter.com/4csUS6IRKZ

“It will not surprise those who know her that Barbara Bush has been a rock in the face of her failing health, worrying not for herself—thanks to her abiding faith—but for others,” the April 15 statement said.

The statement did not say what illness the former first lady was hospitalized for, however, she was previously suffering from congestive heart failure and chronic obstructive pulmonary disease, reported Today.

“She is surrounded by a family she adores and appreciates the many kind messages and especially the prayers she is receiving,” the statement added.

Barbara Bush has left behind a legacy of charitable causes including her passion for teaching children to read, reported The Associated Press.

The Barbara Bush Foundation for Family Literacy was established during Barbara’s White House years. The foundation aims to improve the lives of disadvantaged Americans by boosting literacy among parents and their children.

Her husband, George H.W. Bush, was the country’s 41st president. He’s now 93 years old, is struggling with a Parkinson’s-like disease, and is confined to a wheelchair.