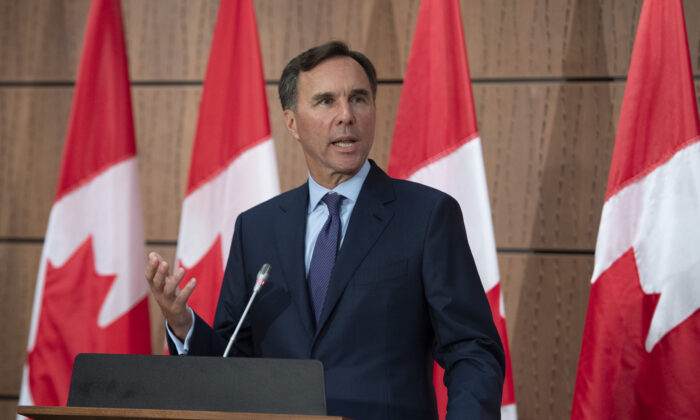 Former finance minister Bill Morneau says he is concerned about Canada’s future, while criticizing the federal government for favouring short-term political goals in their economic policies that he says run counter to the betterment of the country.

In his first speech since leaving politics, Morneau, who was finance minister in the Liberal government from 2015 to 2020, said Canada could pay a high economic price if the government continues to implement tax-and-spend initiatives.

“So much time and energy was spent on finding ways to redistribute Canada’s wealth that there was little attention given to the importance of increasing our collective prosperity,” said Morneau at the C.D. Howe Institute’s annual directors’ dinner Wednesday evening.

“They might help you sell a few more memberships. It might even help you win an election. But when you put exciting the base ahead of crafting good policy … you’re doing an incalculable harm to the country you claim to love, and to the people that you seek to lead.”

Citing research by the Organization for Economic Co-operation and Development that forecast Canada’s gross domestic product growth over the next four years, Morneau said the analysis shows the country will lag far behind the United States, Australia, and comparable European economies.

He attributed it to a lack of emphasis on long-term sustainable economic growth.

“I can tell you that there is no real sense of urgency in Ottawa about our lack of competitiveness,” he said.

“We have to stop thinking about policy in terms of short-term wins, and refocus our efforts on long-term solutions. I know that all of the political incentives run counter to this.”

Morneau, who resigned from his post in August 2020 amid controversy over his relationship with WE Charity, said many of his initiatives, including recommendations proposed by the Advisory Council on Economic Growth he convened in 2016, were never acted on due to them becoming “politicized.”

“I struggled to get our government to focus on the need for sustained economic growth, because it was constantly crowded out by other things that seemed more politically urgent, even if they weren’t truly as important,” he said.

Morneau said the partisan climate in Parliament that prioritizes style over substance seems to be getting worse, compared to when he was a cabinet minister.

“When I look at politics in Canada today—from the perspective of a former insider—I have to confess that I’m much more worried about our economic prospects today, in 2022, than I was seven years ago,” he said.