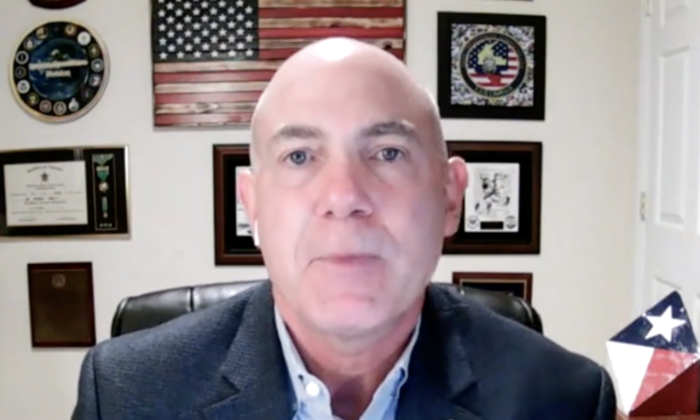 Derek Maltz, a former special agent in charge for the Drug Enforcement Administration, during an interview for NTD on Aug. 19, 2022. (NTD)
Immigration & Border Security

Masooma Haq
Masooma Haq began reporting for The Epoch Times from Pakistan in 2008. She currently covers a variety of topics including U.S. government, culture, and entertainment.
View profile
Follow
and Kevin Hogan

As a record number of illegal immigrants are crossing the southern border with Mexico, federal law enforcement officials are warning against a new trend of fentanyl being distributed in colorful pills that resemble candy.

In an Aug. 19 interview for NTD, Derek Maltz, a former special agent in charge at the U.S. Drug Enforcement Administration, said the drug cartels are taking advantage of the open border and targeting younger people.

“It’s a very deceptive, very strategic, very calculating marketing plan to actually build up an entire new customer base, because they know that the more kids they get addicted to this fentanyl, the more money they’re going to make,” Maltz said.

U.S. Customs and Border Protection (CBP) seized over 15,000 such fentanyl pills at a border crossing on Aug. 17.

According to CBP statistics released on Aug. 15, the amount of fentanyl confiscated by federal agents at the southern border jumped by more than 200 percent in just one month from June to July.

Michael Humphries, area port director for the Port of Nogales in Arizona, posted a warning on Twitter about the colorful fentanyl pills.

“CBP officers #Nogales POE seized over 15,000 fentanyl pills strapped to a person’s legs. Second consecutive day colored fentanyl pill with the appearance of candy was seized. This could be the start of a trend with Transnational Criminal Organizations targeting younger users,” he wrote in the Tweet.

8/17 CBP officers #Nogales POE seized over 15,000 fentanyl pills strapped to a person’s legs. Second consecutive day colored fentanyl pills with the appearance of candy seized .This could be the start of a trend with Transnational Criminal Organizations targeting younger users. pic.twitter.com/y5KT5Zveop

Parents must educate themselves and become more involved to prevent their children from being drawn into drug use, Maltz said, adding that he thinks the White House is not doing enough to fight the drug epidemic.

The Department of Homeland Security did not immediately return a request for comment.

Many times, drug users are not aware of how deadly the drug they are taking is, and then it’s too late, said Maltz.

Because teens and young adults predominately use social media over other sources of news, Maltz believes there must be a concrete social media anti-drug campaign to warn young people and their parents about the dangers of these new influxes of hard drugs.

“They’re all on the social media apps, so we have to get role models, influencers, professional athletes, and celebrities to start putting out the warnings,” he said. “The kids are just not paying attention.”

Maltz wants to warn parents to be aware of how pervasive fentanyl is and all the forms it can take, so they can talk to their children about the dangers of taking unknown substances.

“They’re finding their kids dead in their bedrooms as young as 13 years old, and what I’m finding out is they never even heard of fentanyl,” he said. “So it’s a total lack of education on the current drug crisis.”