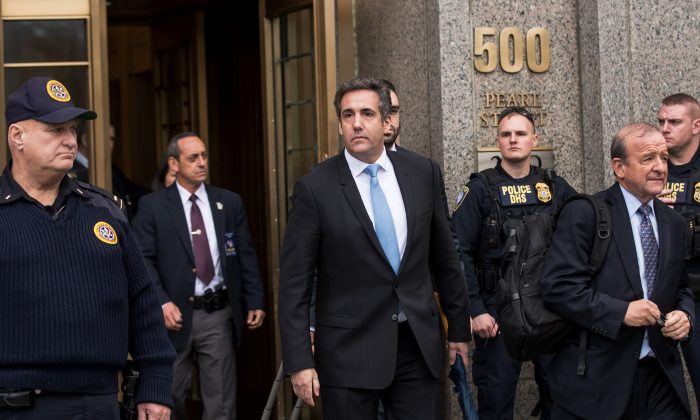 Payments used to silence people who have potentially damaging information on a political candidate cannot be classified as a campaign contribution, according to the former chairman of the Federal Election Commission (FEC), Bradley Smith.

“Not everything that might benefit a candidate is a campaign expense,” Smith wrote in an editorial for the Wall Street Journal.

Bradley’s comments were published the day after the FBI raided the home, office, and hotel room of President Donald Trump’s personal attorney, Michael Cohen. The FBI agents were specifically looking for payments Cohen made to silence two women who claim to have had affairs with Trump more than a decade ago. Trump and Cohen deny the allegations about the affairs.

Campaign finance laws state that candidates cannot use campaign funds for expenses that would exist irrespective of the campaign, Bradley explained. These laws were created to thwart bribery and to prevent candidates from misusing funds for their own benefit.

“Personal debts, for example, are ‘related to’ the campaign—if unpaid, the candidate’s reputation might suffer, Bradley wrote. “A Rolex watch, a new suit, or a haircut might help a candidate look good on the trail.”

“If paying hush money is a campaign expense, a candidate would be required to make that payment with campaign funds,” Bradley said. “How ironic, given that using campaign funds as hush money was one of the articles of impeachment in the Watergate scandal, which gave rise to modern campaign-finance law.”

Cohen’s payment to the woman who claims to have had an affair with Trump would have to be paid with campaign funds if it is to be viewed as a campaign contribution. But paying someone to keep silent about an alleged extramarital affair is not an expense solely related to a campaign, Bradley explained.

“There are many reasons, including personal and commercial ones, why Mr. Trump might want to keep allegations of extramarital affairs out of the press,” Bradley wrote.

If the same loose interpretation of campaign finance laws were applied to Trump’s opponent in the election, Hillary Clinton, charitable spending by the Clinton Foundation could be viewed as benefiting her candidacy and would have to be considered a campaign expense, Bradley pointed out.

Video: President Trump Comments on the FBI Raid of His Personal Attorney