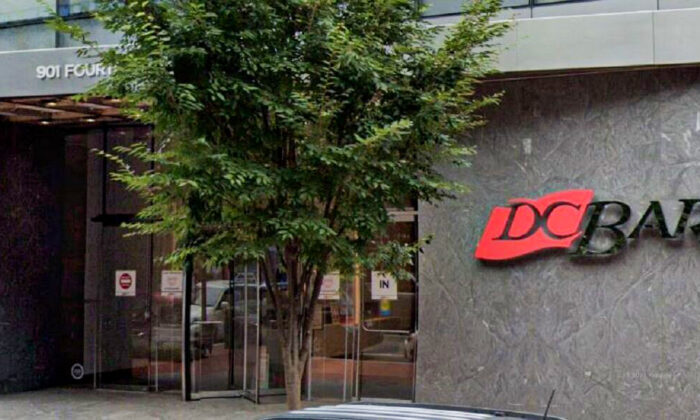 In this undated image, the front of the D.C. Bar office is seen in Washington. (Google Maps via The Epoch Times)
Politics

The former FBI lawyer who admitted to fabricating evidence against a former Donald Trump associate during the Trump-Russia investigation has been restored to “good standing” status by the District of Columbia Bar.

Kevin Clinesmith was restored despite being a convicted felon who has not yet finished his probation.

Clinesmith pleaded guilty last year to doctoring an email that originated with the CIA. He manipulated the message to make it seem as if Carter Page, the former Trump campaign associate, was not an asset for the CIA. Page was a CIA asset.

Clinesmith claimed he did not intend to lie when he made the fabrication and received no jail time from a federal judge in January.

While the Michigan Bar disbarred Clinesmith because he pleaded guilty to a felony, the D.C. Bar opted for a temporary suspension.

Clinesmith was suspended “based upon his conviction of a serious crime in the United States District Court for the District of Columbia,” the bar said at the time.

Clinesmith has since been restored to “good standing” status, according to the bar’s website.

The move came after the bar’s recommendation to leave Clinesmith off suspension was approved by a court that oversees the bar, RealClearInvestigations reported. It also came after Clinesmith failed to let the bar know of his guilty plea for five months, much longer than the time period required by the organization.

A spokeswoman for the bar told The Epoch Times in an email that the organization “does not handle or issue statements pertaining to disciplinary matters of its members.”

Clinesmith was the first person charged by John Durham, who was at the time a U.S. attorney and is now a special counsel attempting to root out the fraud and corruption that took place when federal authorities launched the Trump-Russia investigation.

John Ratcliffe, the former director of national intelligence, said recently he believes “there will be many indictments based on the intelligence that I gave to John Durham and that I have seen.”