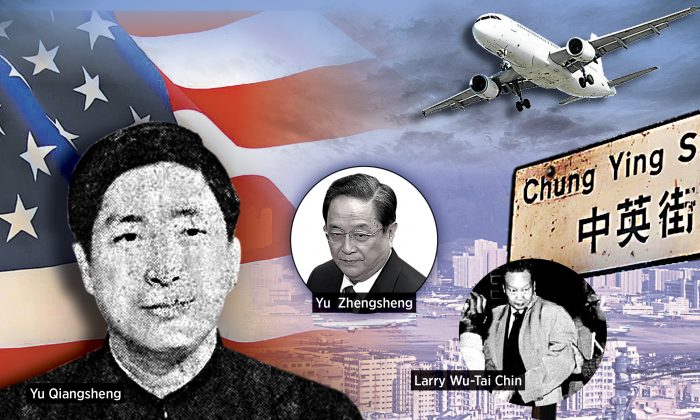 When Ling Wancheng fled to the United States recently, it created quite a commotion. His older brother, Ling Jihua, was one of the highest ranking officials to come under investigation in Xi Jinping’s anti-corruption probe.

The younger Ling’s escape to America brings to mind another defection some 30 years ago, that of Yu Qiangsheng.

The Chinese Communist Party (CCP) claimed that they had killed Yu but late last year the former head of the FBI Chinese counter-intelligence group, IC Smith, revealed otherwise. Smith told Voice of America that Yu was recruited by the Central Intelligence Agency (CIA).

Yu Qiangsheng’s Escape to US Through Hong Kong

In October 1985, Yu was a senior intelligence officer in China and a director at the Ministry of State Security of the People’s Republic of China.

While in Hong Kong inspecting the intelligence system there, he disappeared during a shopping trip at Chung Ying Street, a border street between Shenzhen and Hong Kong.

His disappearance was immediately reported to Beijing which ordered Yu be found at all costs, dead or alive.

A few hours later, gunmen and CCP secret agents arrived at the Hong Kong Kai Tak International Airport but Yu was already on a civilian plane taking off for the U.S.

Yu’s family survived reprisal despite his defection, unusual in communist China. They were protected by Deng Pufang, the son of former supreme leader Deng Xiaoping.

Yu’s younger brother, Yu Zhengsheng, even prospered and is currently ranked No. 4 in the party.

Yu’s defection was notable because he revealed the top CCP spy embedded in the United States, Larry Wu-Tai Chin. Chin was subsequently arrested and committed suicide in prison.

Yu disappeared in the 1990s and the CCP spread rumors that the regime has successfully assassinated him.

Chinese state media reported that Yu was pursued by five special agents and subsequently drowned in the sea in South America. Some said he was fed radioactive salt when he was traveling in South America, while other believed Yu was executed on the west coast of the U.S.

However, in a program in December, 2015, former head of the FBI Chinese counter-intelligence group, IC Smith, told Voice of America the inside story of the CCP spies.

Smith said it was not true that Yu was killed by the CCP agents. According to him, Yu was recruited by the Central Intelligence Agency (CIA) under the name “Planesman”.

When asked if Yu had moved to California, Smith declined to comment.

Chin, the revealed CCP spy, had a more cruel fate. On November 24, 1985, one month after Yu’s defection, Chin was arrested by the FBI and charged with passing information to the Chinese regime for the last 30 years.

When Chin’s wife visited him, he told her he had US$100,000 in his bank account in Hong Kong. Chin’s wife flew to Hong Kong only to find the account had been frozen.

During the Cold War, the USSR sometimes exchanged hostages with the U.S. for their secret agents. Chin was hoping the CCP would do the same for him.

Chin hoped he might be freed through a prisoner exchange that would see China release democracy activist Wei Jingsheng to the U.S. in exchange for the U.S. releasing Chin to China.

At the time, a spokesperson at China’s Ministry of Foreign Affairs denied the regime had any connection with Chin.

Realizing he had been abandoned by Beijing, Chin committed suicide in prison on the morning of February 21, 1986 at the age of 63.

The last person who visited Chin was a “reporter” from a pro-CCP Chinese paper in America.

Translated by Benjamin Ng and Su Lin, edited in English by Matthew Little.