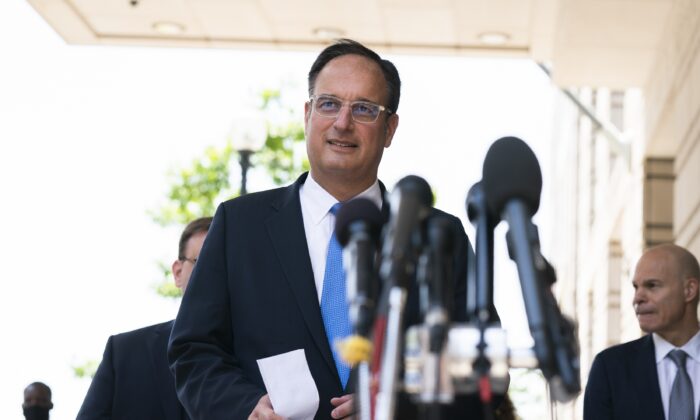 Michael Sussmann, Hillary Clinton's 2016 presidential campaign lawyer, is seen outside of the federal courthouse in Washington on May 31, 2022, after he was acquitted of lying to the FBI. (Manuel Balce Ceneta/AP Photo)
Crossfire Hurricane

It is not known whether Special Counsel John Durham’s team will bring up any criminal conspiracy lawsuit in its investigation into the discredited Trump–Russia collusion narrative until its next indictments are revealed, but facts once disclosed will become public information, said Marc Ruskin, a former longtime FBI agent.

Former Hillary Clinton campaign lawyer Michael Sussman, who went on trial in May 2022 for allegedly lying to the FBI, was acquitted on May 31.

Among the disclosures made during the trial is the testimony of Clinton’s top aide showing that Clinton personally approved giving the same information to reporters that Sussmann took to the FBI. This is one example of information not known prior to the trial which has become public, Ruskin told EpochTV’s “Crossroads” program.

Therefore, defense attorneys sometimes avoid having the same witnesses testify in multiple trials as their subsequent testimony could be attacked, Ruskin said.

Sussmann’s trial was the first one connected to Durham’s investigation into the discredited Trump–Russia collusion narrative.

Durham’s team did not bring any charges of conspiracy, although “an understanding” between Sussmann and other individuals involved in the case existed, and this would have justified applying certain rules of evidence in the trial such as allowing the admittance of hearsay evidence, Ruskin said.

Decisions on whether conspiracy charges should be brought up or not are made by Durham’s team based on “what they can prove, what they think they can prove, and what may be overreaching,” Ruskin said.

“In some cases, they may bring their substantive charge like they did here, of lying to the FBI, and not bring a conspiracy-type charge.”

“I’d have concerns that if they tried to charge too much that they may end up losing everything. So sometimes it’s better to keep it simple in order to have a higher likelihood of conviction, but it really varies from case to case, depending on the substantive evidence they think they can bring against any particular defendant in the case.”

Ruskin said that there may be some conspiracy charges in the future but it will not be known until the indictments are made public.

“Judge [Christopher] Cooper ruled prior to the trial there would not be evidence permitted having to do with the conspiracy or joint venture aspect of the prosecution’s case. And that severely limited their ability to present all the evidence which was available. And so the evidence which was not admitted, I will suggest, impacted the outcome of the case.”

To date, there is no indication that Durham is planning on bringing a kind of investigation that will lead to a RICO (Racketeer Influenced and Corrupt Organizations Act) type of indictment, Ruskin said.

RICO is a federal law aimed at combating organized crime and racketeering activity as part of criminal enterprises.

Evidence for a possible RICO charge needs to prove that there has been a kind of joint venture between the defendant and others in order to achieve a certain goal, Ruskin said.

However, it seems that the objectivity of the jury in Sussmann’s case was not ideal, Ruskin said.

The period of jury deliberation was surprisingly short in this case, he noted. The jury was charged on a Thursday, then there was a long weekend for Memorial Day, and then by the Tuesday morning the jury came back with a verdict, Ruskin explained.

In a case of such magnitude and importance, where there is a lot of evidence, it would be expected that the jury that is truly impartial “would carefully review the evidence, minutely go over the different testimony, and review all the documentary evidence, emails and so forth,” Ruskin said. “And then come discuss it in-depth and come to a conclusion.”

Ruskin also pointed out that jury selection is the most important part of the trial. It is the stage where the attorneys from both sides select and ask jurors questions in the hope of selecting “ideally a fair and impartial jury,” he explained.

In this case, at the very inception of the trial, the way the jury was picked “may have ultimately predestined essentially the outcome of the trial,” Ruskin said.

Some jurors selected for the trial had conflicts of interest, said Kash Patel, host of the EpochTV’s Kash’s Corner.

One jury member told the judge after the start of the trial that her daughter and Sussmann’s daughter are on the same crew team. The juror claimed that she did not know about this until her daughter mentioned it the day before. Cooper denied a request from prosecutors to remove the juror.

Judge Cooper also had a possible conflict of interest because of being married to the lawyer for Lisa Page, an ex-FBI attorney involved in the FBI’s probe of the Trump campaign, Patel said on Kash’s Corner.

“Those who are pleased with the verdict are going to come to capitalize on it and make pronunciations that it’s a death knell for the entire scope of the Durham investigation,” Ruskin said.

“Durham and his team have been working for several years on the investigation, they are very thorough and methodical so it can be expected that they will continue to move forward and just wade through the negative publicity so long as they believe in their case and base it on a lot of the evidence that did come out in the course of the trial.”

“There seems to be a lot of substantive issues that still remain to be reviewed and clarified, and presented both to a jury in criminal court, as well as to the general public and the court of public opinion.”