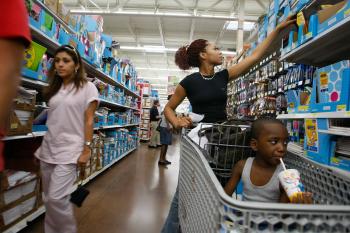 Caroline Dobson
View profile
Follow
biggersmaller
Print
Wal-Mart Stores Inc., the world’s largest retailer, is being taken to court in the largest class-action employment lawsuit in U.S. history against a private employer, regarding a lengthy dispute over the company’s alleged gender bias in pay and promotions.

Wal-Mart is appealing a 6-5 ruling by the San Francisco-based 9th U.S. Circuit Court of Appeals, which enables women who have worked at Wal-Mart since 2001 to be part of a single class-action lawsuit. This combined multiparty litigation process will move to a trial whereby a decision against the company could leave it liable to billions of dollars in damages.

“The class is larger than the active-duty personnel in the Army, Navy, Air Force, Marines and Coast Guard combined—making it the largest employment class action in history by several orders of magnitude,” said the Bentonville, Ark.-based company.

The potential of former Wal-Mart employees joining forces to claim their case for discrimination will be a pivotal issue.

The case brought to court claims that women were compensated less than their male co-workers and were not provided with equitable opportunities for promotion. The plaintiffs are seeking back-pay and punitive damages against the largest private employer and grocery retailer in the United States.

The lawsuit alleges that the company's "strong, centralized structure fosters or facilitates gender stereotyping and discrimination,” according to court documents.

The lawsuit was originally filed by Betty Dukes—a store greeter in Pittsburg, Calif.—along with five of her co-workers in 2001.

"It has taken a very long time, and a tremendous amount of work, but it looks like we're finally going to get our day in court," Dukes said after the ruling was announced. "That's all we've ever asked for."

"We disagree with the decision of the sharply divided 6-5 court to uphold portions of the certification order, and are considering our options, including seeking review from the Supreme Court," Wal-Mart said in a statement. "We do not believe the claims alleged by the six individuals who brought this suit are representative of the experiences of our female associates. Walmart is an excellent place for women to work and fosters female leadership among our associates and in the larger business world."

In 2008, the company paid up to $640 million to settle 63 federal and state class actions where workers alleged they were cheated hourly workers and were forced to work through breaks.

“Wal-Mart is an excellent place for women to work and has been recognized as a leader in fostering the advancement and success of women in the workplace,” the company said in a statement.