When Huawei is defeated, the Chinese regime will be close to total collapse because Huawei is the last bastion of the regime, according to a former Huawei employee 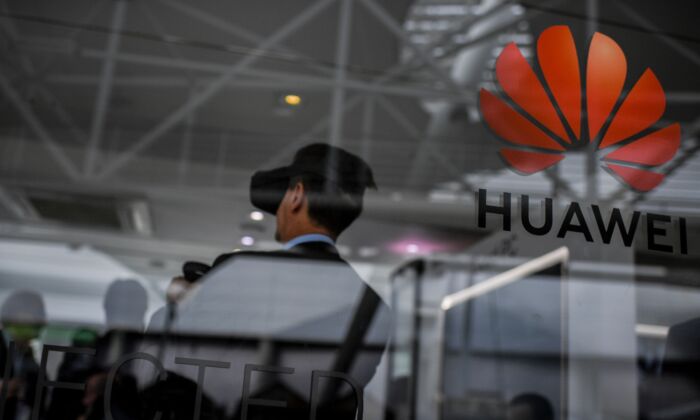 Chinese telecom giant Huawei has a stand at the Web Summit in Lisbon, Portugal on Nov. 6, 2019. (Patricia De Melo Moreira/AFP via Getty Images)
By Olivia Li

Chinese telecom giant Huawei got a bad rep around the world after information from a former Huawei employee was published online. Another former employee shared his experiences with The Epoch Times on Dec. 5.

Jin Chun obtained a master’s degree in computer science in Ireland and worked for Huawei on big data research for three years before leaving the company in April of this year. He says that Huawei is actually an agent of the Chinese communist regime, a military unit that combines commercial activities, espionage, intelligence, and technology theft in its daily operations.

Li Hongyuan, who worked for Huawei for 13 years, was terminated and wrongfully imprisoned for eight months after attempting to expose corruption within the company. His story went viral on China’s social media.

According to Jin, there are many victims similarly wronged by Huawei. Most of them choose to keep silent because if they speak out, nothing changes and they pay the price.

“In China, even the Supreme Court will not punish Huawei by following the law,” Jin said.

Former Huawei colleagues told him that some Huawei employees have knowledge of Huawei’s top secrets that they are absolutely forbidden to divulge.

According to Jin, several employees have attempted to reveal that they were selling Huawei equipment in Iran. Their evidence includes entry visas granted by Iran and payment records of a $100 per day subsidy they received while working there. But Chinese police and the judicial system won’t deal with these cases openly as they are secrets.

“Those employees were sent to prison on charges of extortion and tortured until they promised to never reveal any secrets after they are released. This explains why none of those Huawei victims ever file complaints against the police, but continue to express their anger at Huawei,” he added.

Jin said the biggest issue with Huawei is its connection with China’s National Security Department. On the surface, Huawei is a business entity, but it is not that simple.

“Some say Huawei is controlled by the Chinese Communist Party (CCP). I would say it is [part of] the CCP itself. That is plainly obvious,” he said.

“Therefore, it is impossible for Huawei to have a conflict of interest with the CCP. Several top leaders in the company are from CCP government agencies—either the Chinese army’s General Staff Department, or the National Security Department. That is precisely Huawei’s background. The company definitely represents the will of the CCP.”

Jin explained that Ren and other former executives are obviously from the CCP’s intelligence system, and their identities have been exposed. The CCP thus had to replace them with people who are unknowns.

According to Jin, there are three reasons why Huawei has been hugely profitable. First is support from the Chinese communist regime; second is various monopolies; and third is adoption of management systems used by American companies.

“It has therefore become one of the most successful among all of the CCP’s enterprises,” he said.

In terms of technology and intelligence, Huawei is “competent and very powerful,” Jin said, pointing out that the company has contributed to China’s “One Belt, One Road” (OBOR, also known as Belt and Road) initiative, and helped the Chinese regime develop high-tech products such as facial recognition, involving various aspects of cryptography.

Moreover, Huawei adopted certain aspects of western style management, such as, those of IBM and the former Soviet Union’s KGB. The company’s buildings are divided into color coded zones: blue, green, yellow, and red, with red being the top classified grade. Employees are forbidden to communicate or share data with people in other zones. To access data from another zone, an employee needs to first get permission.

Jin revealed that Huawei not only monitors Chinese citizens living in China, but also collects information from overseas Chinese nationals.

Jin said in some Western countries, such as the United States, Japan, and many European countries, it is forbidden by law to collect IMEI information, but Huawei still tries in these countries.

Moreover, Huawei has helped some African and Eastern European countries, including Romania, with various surveillance projects and also allegedly cooperated with Germany’s Deutsche Telekom AG in a data acquisition project.

“The company’s executives told us the surveillance projects are all legally allowed surveillance. It must be sheer lies,” Jin said.

Jin’s specialty is big data analysis, so the department he worked in focused on analyzing people’s likes, preferences and personalities, and their anticipated future spending patterns.

In other words, Huawei does not only use its surveillance and data analysis technologies to help China’s National Security Department monitor the Chinese people, it also makes a profit by studying consumer habits.

“It’s not easy to achieve all this,” Jin explained. “First of all, data analysis needs to dig out a lot of private information and know the person’s spending habits. The system is able to make certain predictions. When the person suddenly does something outside of what’s predictable, the system will try to analyze: has this person learned to break through the Internet firewall? Has he or she become a foreign spy? It is very difficult, yet my department was able to do precise analyses,” he said.

Not Much Innovation, Mostly Plagiarism

Shortly after Jin joined Huawei, he discovered that it was very different from his notion of a decent high-tech company.

“Many so-called innovations were actually plagiarized. As a matter of fact, Huawei does not have much innovation. More often than not, the company simply takes over the paths others are walking on, and forces competitors into a dead-end. Huawei is able to do that because it is backed by the iron-handed state apparatus—the entire judicial system always sides with Huawei. In the end, all patents belong to Huawei, even inventions by other companies eventually become Huawei’s intellectual property. This is how Huawei rose to become the number one IT company in China.”

According to Jin, last year, an employee at Huawei’s Nanjing Research Center reported to the branch’s top managers that a project team claimed to have developed a new tool that was actually plagiarized from China’s Open Source Software Community. The managers who received his letter took revenge on him, and almost kicked him out the company. The entire company then launched intensive propaganda, using pretexts to defend the new development as original.

Huawei unashamedly proclaims that the company worships and adopts an aggressive and ruthless work environment known as “wolf culture.”

Jin said he prefers to call it “wolfdog culture” because employees work like a dog every day, and the company encourages them to report on and bully each other.

According to Jin, most employees only have 4 days off each month. Usual working hours are 9 a.m. to 11 p.m. When a project is at a crucial stage, the engineers have one day off a month. Those who work to 3 a.m. may take a half day off the following morning.”

Worst of all, when the company needs to reduce the workforce, instead of laying off employees with a severance package, management makes employees work overtime on a crazy schedule, so they will quit on their own.

In January of this year, Huawei CEO Ren Zhengfei announced a layoff plan to “remove mediocre employees.” After U.S. President Trump blacklisted Huawei in May, the company felt an urgent need to cut its workforce.

“The ‘layoff’ I know of was achieved like this: in a project team of about 40 people, the manager forced the engineers to work until midnight every day. Eventually, 90 percent of the engineers quit leaving only four in the team,” Jin said.

As a matter of fact, the project they worked on was never delivered, but the project manager was given a raise because he helped get rid of the dozens of employees who were no longer needed.

“Huawei just likes to bully employees like this—force them to quit voluntarily. Thus, those who quit are not counted as layoffs.”

This incident helped him realize that Huawei is a meat grinding machine serving a totalitarian authority, using a cloak of high-tech and western style management.

“The company is built and developed on a blood-sucking mechanism,” Jin said. “All your contributions are attributed to the management, and you are left with nothing. If the managers like your obedience, they may give you some petty rewards; if they think you are not obedient, they will give you nothing and even exact revenge.”

Reporting on Each Other

Jin explained why he decided to quit Huawei.

In recent years, the company openly encouraged employees to report on each other. At a staff meeting earlier this year, a manager read the company’s official statement to let everyone know that a designated email account had been set up for people to report on others.

“Isn’t that the same as another Cultural Revolution? I don’t like this kind of work environment at all,” Jin said. “I learned from one of Huawei’s inside forums that several times, the person who was reported was then sent to prison. More often than not, the person going to prison was a division manager, charged with embezzlement, and the prison terms were usually 10 to 11 years. We all wondered what the actual situation was in these cases. I guess only Huawei’s top executives know.”

Using software to circumvent China’s firewall, Jin said he once browsed an overseas website. As he was reading news reports on Voice of America, a manager came over and saw what he was doing. Jin was afraid that he would be reported and punished, so he decided to immediately submit a resignation letter.

Huawei Is the CCP’s Last Fortress

According to Jin, Huawei is not just an individual enterprise, it is a huge industrial chain. In addition to its subsidiary research centers in Beijing, Nanjing, Shanghai, Xi’an, and India, there are also many outsourcing and subcontracting companies downstream that are either directly controlled by Huawei or whose intellectual property rights are controlled by Huawei.

Huawei has approximately 200,000 employees and its Beijing and Nanjing Research Centers each have over 10,000. Altogether, there are several million employees in the Huawei family, Jin revealed.

Jin specifically mentioned that Huawei’s Beijing Research Center is engaged in the technology development of Core Network, and their data and technology are the most sensitive. For example, a country in Europe purchased Huawei’s equipment and Huawei could, through this country’s network interactions with other countries, steal technologies from all of Europe.

Both Huawei and its Beijing Research Center have a particularly good relationship with Deutsche Telekom and Belgian Telecom, and they have a lot of business cooperation.

“Huawei is indeed the most powerful enterprise under the CCP. As it has learned to make use of western style philosophy and technology to serve a totalitarian regime. It is therefore, the most dangerous component of the CCP and brings the greatest harm to the world,” Jin said.

“My conscience forces me to speak out,” he continued, “I feel that if Huawei could be defeated, the CCP would be very close to complete collapse because Huawei is its last and strongest fortress. However, if Huawei can’t be defeated, it is literally a nightmare for the entire mankind.”