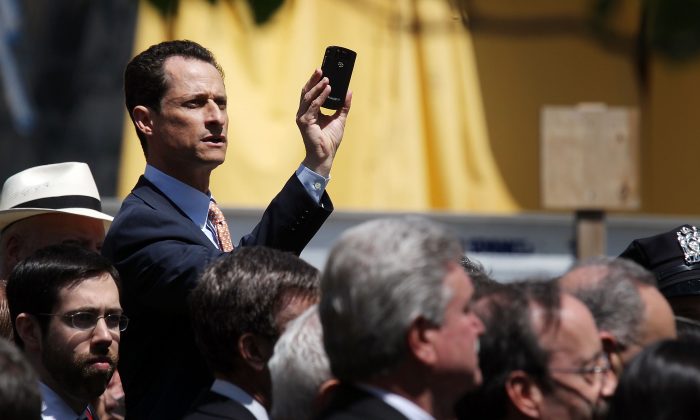 Anthony Weiner at wreath laying ceremony at Grand Zero on May 5, 2011. Weiner is mulling a run for New York City mayor, about two years after he resigned from being a Congress person amidst a sexting scandal. (Mario Tama/Getty Images)
New York

NEW YORK—Anthony Weiner, a former representative who resigned amidst a sexting scandal in 2011, could join the race to replace Mayor Michael Bloomberg.

Weiner was practically forced to resign as outcry over the scandal—pictures he sent to a woman who was not his wife became public—but maintains almost $5 million in campaign funds, which could catapult him into the mayor’s race.

Weiner has spent more than $100,000 on polling and research, trying to find out whether voters will give him another chance, according to an interview with New York Times Magazine.

“I don’t have this burning, overriding desire to go out and run for office,” said Weiner. “It’s not the single animating force in my life as it was for quite some time. But I do recognize, to some degree, it’s now or maybe never for me, in terms of running for something.”

However, since things changed so much after the scandal, Weiner is contemplating the decision, where before the scandal he was considered one of the if not the frontrunner.

“Am I still the same person who I thought would make a good mayor?” He asked.