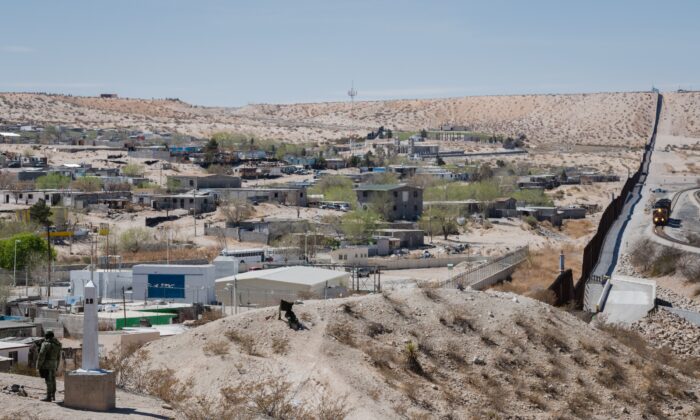 A member of the Mexican Guard stands guard at the border between the United States and Mexico in Sunland Park, N.M., on March 15, 2021. (Justin Hamel/AFP via Getty Images)
Immigration & Border Security

“At the end of the day, these illegal migrants don’t listen to government officials,” Wolf told Fox News, responding to calls from Biden to migrants urging them to stay home.

Wolf said illegal immigrants instead “listen to other illegals who have gotten into the U.S. that call them and tell them that they are here, they are staying in the U.S., they are not being deported or removed to their home countries,” Wolf remarked.

Biden told ABC News on Tuesday that migrants thinking of traveling to the U.S.-Mexico border should not “leave [their] city, or town, or community.”

More than 100,400 people tried to cross the U.S.-Mexico border in February, representing a 28 percent increase since January, said Troy Miller, the acting commissioner of U.S. Customs and Border Protection.

Wolf told Fox that the Trump administration had different messaging than the current one.

“Back in 2019 under President Trump we had messaging as ‘don’t come because you will not be let into the country,’” he added. “We know that the vast majority of these folks do not qualify for asylum, but unfortunately today we have a different set of messaging and a different set of policies in place which are encouraging, they are the pull factors that we see today, which is encouraging this crisis.”

Lawmakers along the border have said that the surge of illegal immigrants is overwhelming their communities.

“You have all these small communities that are doing everything they can to stay afloat during this environment,” Rep. Tony Gonzales (R-Texas) told Fox61. “These communities along the border, in particular, are compassionate communities. Immigration is not a new topic to them, but the numbers that are coming across are record numbers,” added the lawmaker. “Our Border Patrol agents are stretched thin, they need resources today.”